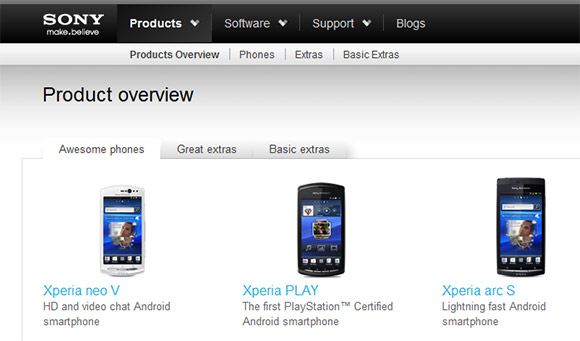 We knew it would happen sooner or later now that Ericsson is out of the picture. Sony Ericsson Mobile is history and the new name of Sony's mobile division is Sony Mobile Communications. The older Sony Ericsson phones has moved in to the new site as well so owners of Sony Ericsson will still find support, applications and info about their older handsets on the new site.

The sub-sites such as the Product Blog, Developer Blog and Greenheart Blog still uses the old layout and colour schemes, but the Sony Ericsson name is removed as well as the green/red/blue liquid identity logo. Changes like this make us think how much will the Sony re-branding cost? Sony will have to throw out everything having the old logo printed on it.

But a green brand logo is not everything. The challenge for Sony now is to convince its smartphone customers that all the positive values from Sony Ericsson still is of importance and that new inspiration from Sony Corp will be transferred to the Sony Mobile division.

Like a lot of links lead to the old website and stuff. Hope all work will be complete by the end of the month.

adsada10 years, 4 months ago
I have mixed feelings, this website does seem a lot more mature than the childlike

one, I never was a fan of the SE new website after they changed it at the end of 2009. Before this is looked a lot nice IMO but I think I'm ready for the new fresh Sony.

they are putting a lot of effort into the "networked society" campaign, first ces now mwc
does a network/platform manufacturer really need to put so much energy behind its consumer awareness ?
it looks as if they still want to look relevant to consumers, but why ?

randomuser10 years, 4 months ago
So its now official that Sony will use XPERIA branding for all its future phones and it will be the ONLY brand for sony phones. Similar to what Sony did when they acquired Konica Minolta's DSLR business and used the Alpha brand name which was being used by Konica Minolta.

one, I never was a fan of the SE new website after they changed it at the end of 2009. Before this is looked a lot nice IMO but I think I'm ready for the new fresh Sony.

Mixed feelings??? I'll go crazy if someone will like the new web site, as there is an exaggerated hype around the phone business taken over by Sony too. The new phones' UI isn't just polished in my opinion, it's simplier and less colourful than 2011's phones. I would be glad to see more options of customization like customizable and editable themes.
BUT, the new website isn't refined. It's simply poor, with limited information. In Europe just for Germany, Spain, France, Sweden, UK and Russia is available local site, and even there you can find almost nothing. If the new phones developed under the leadership of Sony will reflect also this concept and the support will be such poor too, than I won't expect any groundbreaking from Sony.
In this stage you can say that the new Xperia S is stylish, polished, refined, and the upcoming phones will be so, but we don't have seen any phones developed under Sony's leadership, and just hope that those will reflect some of the Ericsson or at least Sony Ericsson's philosophy.

adsada10 years, 4 months ago
I like this little timeline of their history nice to see its not just all forgotten
http://www.sonymobile.com/cws[....]/this-is-us/where-we-come-from

Bonovox10 years, 4 months ago
Looking forward to what Sony do but seems sad Ericsson is really gone

masseur10 years, 4 months ago
Ericsson is far from gone

Bonovox10 years, 4 months ago
I mean from mobiles

masseur10 years, 4 months ago
but they were gone from mobiles 10 years ago?
since then its been SonyEricsson

Bonovox10 years, 4 months ago
Stop trying to be funny

masseur10 years, 4 months ago
fair enough... stop trying to be sad!
getting to the point... exactly was was Sonys input into

and what was Ericssons such that you can now consider Ericsson really gone?
what is it about the joint venture that Ericsson brought to the party that makes you "sad" that Sony has now taken over fully?

Bonovox10 years, 4 months ago
You only asking that cos you never really liked Ericsson as much as Sony. And no I won't answer that question cos this will just go on & on

adsada10 years, 4 months ago
Well it depends what you mean, yes there brand is no longer on mobiles, but their input very much is. It's the same Sony/Ericsson team who now work for Sony mobile, and Sony will be cross licensing Ericsson patients, so they will live on in a way...
Plus I doubt the cash injection Sony has given Ericsson will see them collapse any time soon

masseur10 years, 4 months ago
thanks adsada, it was a genuine question as I couldn't understand why Bono was sad when things are as you say, although control has clearly changed hands, but I wonder by how much in the short term...
(btw, I think you mean "patents"

go to wired.com, they are blowing it out of the window

goldenface10 years, 4 months ago
I'm sure Ericsson had plenty of input.
It was Sony's design and marketing coupled with Ericsson's wireless know-how that was supposed to be the magic formula, not that the JV didn't have a wildly successful few years (K750i, K800i).
They just failed to predict the popularity of the iPhone. But all they had to run with was Symbian based and I'm guessing that it could never have been a match for iOS, in what ever guise (UIQ).

Miss UK10 years, 4 months ago
website looks Good easy to explore and find some techy info
the Xperia S looks a nice eyecatcher on the homepage too

Im still not like the sony Logo though shame they couldn't
of stayed with the way it was written on Sony Ericsson!

Bonovox10 years, 4 months ago
Just been on it & it looks fresh & clean. I wonder how updates via PC will be done now?? Will we see a new update service??

masseur10 years, 4 months ago
I can't imagine that the update service will change that much as the technology is fairly proven.

in which way is it fresh and clean when to me it looks fairly much like the standard Sony site layout into which it has been incorporated, which would be pretty much as expected and which has been around for quite a while...
Sony are definitly making the brand their own!

Bonovox10 years, 4 months ago
Well that's a little obvious they are making it their own. I mean it just looks more clean & clutter free compared to the previous

masseur10 years, 4 months ago
I guess when your site is focussing on a single phone model, it would appear clean and clutter free on that particular page.

but, agreed (re: update service). Sony have not taken over in full yet in regards to software offerings, and as a developer I can say that its easy to change the GUI to make the same underlying technology appear totally different to the user.

GUI (i.e client side) is just the "prettyness" that the user sees whereas the underlying technology (i.e. server side) is what the user doesn't care about and which really makes the difference as this is where the functionality really is.

I'd suggest Sony buyers should expect a new "prettyness" at some point that will probably work just as the old updates have done. No need to reinvent the wheel.

Bonovox10 years, 4 months ago
Am not on about re inventing the whole thing. Was just saying it still says Sony Ericsson on it. And I was wondering what Sony may do either bring out now software for updating or just keep the same but just with Sony on it. Stop over exaggerating my posts.

masseur10 years, 4 months ago
I think my point was that I don't expect much to change in that regard. Indeed I wouldn't expect any deliverables to change quickly given they have only had a couple of months since initial announcement and less than a week since completion.
You seem a bit edgy today, as noticed by someone elsewhere. No need to take my posts personally as you seem to be... this is a discussion forum after all!

Bonovox10 years, 4 months ago
No not edgy at all. In pain but not edgy
More comments