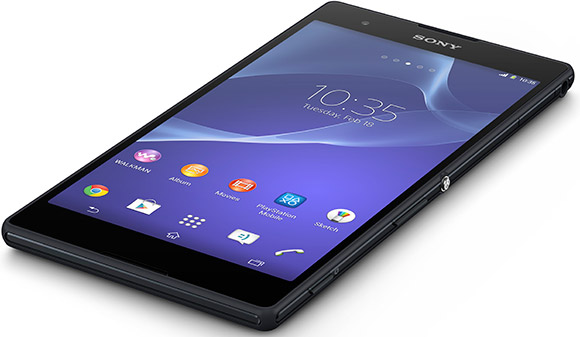 Xperia T2 Ultra is a large smartphone aimed at emerging markets. We do not have information about the expected retail price, but we have compared the Xperia T2 Ultra hardware with Xperia Z Ultra which hinting at a lower price. The size of the display is equally large, but the resolution of 720 x 1080 pixels is not comparable to Xperia Z Ultras Full HD 1920 x 1080 resolution. Xperia T2 is noticeably smaller in size even though the display size difference is just 0.44 inch. 6.44 vs 6.0 inch. 1080 x 720 pixels on a 6-inch display is the same as 216 PPI which we consider as a quite low resolution. On the other hand, most smartphones with huge displays tend to have a low PPI.

Sony Xperia T2 has a 13 megapixel camera with a Exmor RS image sensor and image stabiliser. It is possible to use the HDR function on both still images and movies. A pulsed LED will light up the motive if the motive is too dark.

There is a wide range of connectivity options. We have USB with USB tethering, Wi-Fi a/b/g/n and Wi-Fi Hotspot with a maximum transfer rate of 150 Mbit/s. aGPS / GLONASS, ANT+, Bluetooth 4.0, NFC, SyncML and DLNA support.

A 3000 mAh battery will let you watch video for up to 10 hours. Claimed talk time is 14 hours using the GSM network and up to 24 hours on a UMTS network. If you are lucky, you should be able to have an impressive non-stop 24 hour conversation. Standby time is claimed to be 1071 hours.