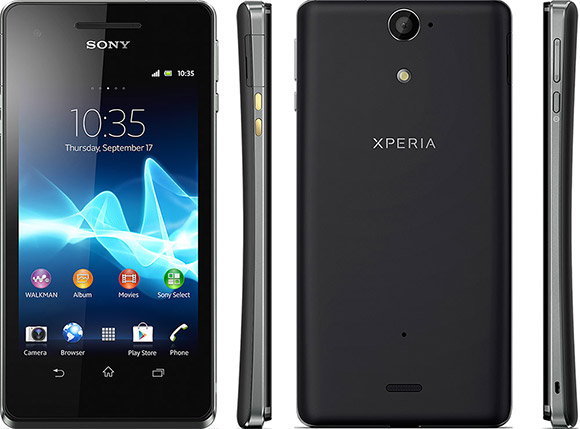 At IFA show this week, Sony announced three new smartphones where the Xperia V was the smallest even though having a 4.3 inch display is probably not what most would characterize as a small smartphone. The display resolution is HD 720 x 1280 pixels and a PPI of 341 is, together with Xperia S and Xperia Acro S, the highest pixel density on any smartphone available today.

Sony has now started to get a good collection of dust and water proof smartphones with the Xperia Active and Xperia Go. The Xperia V expands this range of phones as it has the IP Code IP5X assigned for dust proof and IPX5/7 for its water resistance. The drawback of using a water-resistant phone is that all plugs such as the 3.5 mm audio jack, and other types of ports need to be covered by some kind of protective material and the user need to remove these each time he want to use the USB plug or listen to music for example. The Xperia V has a USB 2 port which can be used for charging and data communication. But as you can see from the product images, the Xperia has additional two power contacts on the side of the device which let users insert the smartphone into a Sony DK25 charging dock without the need of opening the protective USB cover.

Xperia V has what you would expect from a modern smartphone. Including features such as 1.5 GHz dual core processor, GPS, NFC, Wi-Fi, FM Radio, Bluetooth 4.0, 1 GB RAM, built-in 8 GB storage, expandable memory, 13 megapixel camera and more. The Xperia V is a 4G phone with the support for HSPA+ and LTE networks where theoretical download speeds can reach 100 Mbps. The front camera only has a VGA resolution, but it should be just about acceptable for video chats.

Judging from the interest of the Xperia V by our members, this model could be a popular handset the following year. Given a decent price we would not hesitate to add the Xperia V on our wish list for Christmas this year.

Nokia Lumia 920 could be first Windows Phone with PureView camera

chunkybeats10 years ago
I think this going to be my next phone!!!!

goldenface10 years ago
Mine too. I'm just hoping it gets picked up in the UK eventually.

pohuman10 years ago
I think i love this phone.

chunkybeats10 years ago
I should be able to get this via import from Hong Kong to NZ, hopefully its well priced! My Neo V was imported from HK as well as only here in NZ were only selling the Neo here at a stupid price!

I think I want to marry it

I'm going to upgrade to the Xperia T when it comes out and then sell it or the V, it seems my only option at the moment.


Just imagine you going to Parliament trying to get the law changed to marry your phone:lol: Cheating on your missus with a phone tut tut there must be a law against that

chunkybeats10 years ago
I looked on various websites to see what them 2 gold contacts are at the side of the phone and not one says what they are, anyone know? My only grudge is lack of camera shutter button and these 2 gold contacts will be hard to keep clean.
[ This Message was edited by: chunkybeats on 2012-09-11 01:17 ]


Those are for the dock charger. So you don't have to keep opening the rubber protective cover for the micro USB plug.
http://www.sonymobile.com/glo[....]ccessories/charging-dock-dk25/

goldenface10 years ago
The Acro S has the same feature I. I'd be, surprised if EE didn't stock the V eventually.

Miss UK10 years ago
Chunkybeats, EE is a rebranded Orange and T-Mobile or the new name for them (Everything Everywhere)
they started rolling out this service today 4G etc no good unless u have a 4G phone though

Miss UK10 years ago
Yeah should be Exit Escape

ILoveBhe9 years, 11 months ago
any words on the cam?