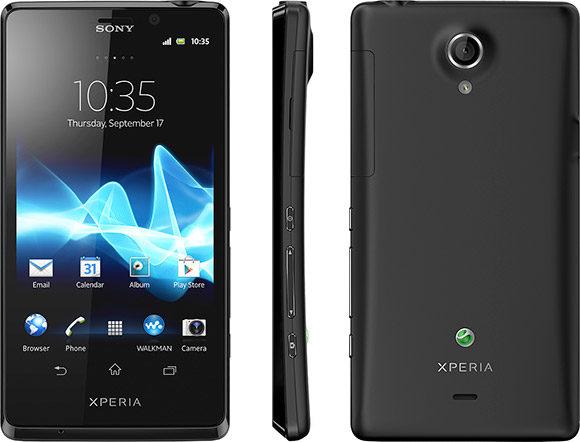 The Sony Xperia T is the new flagship model from the Japanese company. Xperia T has a powerful S4 dual core Krait processor from Qualcomm clocked at 1.5 GH, and a 4.55 inch Reality Display with Mobile Bravia Engine. The Xperia T design is nothing new. It has an inverted form factor compared to the Sony Human Curvature design philosophy. You either like it, or not. One thing is for sure. It is getting harder and harder to see the difference between Sony handsets these days.

Sony Xperia T is the first smartphone from Sony, or Sony Ericsson for that matter, that has WiFi IEEE 802.11a over the 5 GHz band. The 802.11b/g/n are sharing the 2.4 GHz frequency with microwave ovens, Bluetooth and most other Wi-Fi equipment, so despite having a shorter reach with the 5GHz frequency, the option to use the less crowded band could be welcomed by some users.

The Xperia T LT30p will also have support for screen mirroring through WiFi Miracast. This feature is not available at launch time, but will be introduced by Sony later in 2012.

Sony has increased the megapixel count again, and the Xperia T has a 13 megapixels camera on board. Video clips can be captured at 1080p using the main camera or you can shoot with a 720p resolution using the front facing camera.

Sony Xperia T LT30at will only be available in black, while LT30p comes in black, silver or white.

DarkKrypt9 years, 3 months ago
nice phone could be an upgrade from my xperia s.
question, what's the size of the screen if you cut it from the three ics keys?

etaab9 years, 3 months ago
1,000% improvement in the looks department over the Xperia S which was a right dog.
It does seem to have come much sooner than i would have expected after the S, just a few short months.

NightBlade9 years, 3 months ago
To be honest, I prefer the design of the S over that of the T.

worf10009 years, 3 months ago
This will be my next phone, any one know when this beast will come?

goldenface9 years, 3 months ago
This is expected next month, in the UK anyway.