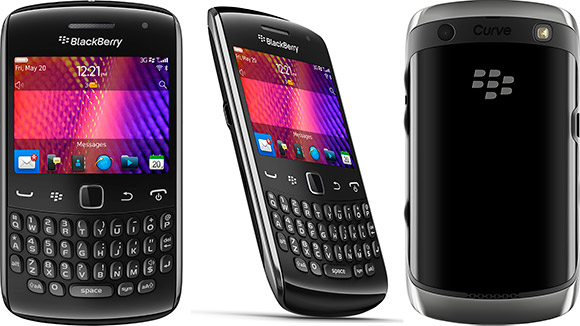 RIM today introduced three new QWERTY smartphones in the Curve series. Much can be said about the BlackBerry form factor, but RIM is still faithful to their design roots. We have added the 9350, 9360 and 9370 to the Esato mobile phone directory and in this process, we noticed more similarities than differences. The press images sent out by RIM are commonly used by all three models. The measurements are the same and there are no visual differences between the three.

Like most new phone releases, the Blackberries has integration with the largest social networks. The Social Feeds has been extended to include updates from media, podcasts and favourites such as Facebook and Twitter.

The BlackBerry Curve  smartphones will be available in the Canada this month, and the rest of the world in September.

Android has more than half the US smartphone market share

julias11 years, 5 months ago
Why do all Blackberry's look the same?

tranced11 years, 5 months ago
In fact these look different if you ask me. The keys are well separated for my taste (assuming I'd own one of these).

julias11 years, 5 months ago
Some very minor changes yes but overall they look like any BB device from years ago there is nothing new in terms of design.

tranced11 years, 5 months ago
In plain sight, yes. But at the end you know there are some differences.

julias11 years, 5 months ago
Yes you would know of course but i doubt anyone else would notice any difference. Surely having phones these days are also about being different and people noticing that you have the latest device?

dancingfate11 years, 5 months ago
I agree. Almost all Blackberry devices look the same.
It is very difficult to recognize each name just by looking the front side.
I can only recognize the Pearl which is I own one.

Bonovox11 years, 5 months ago
I like qwerty keyboard phones and yes maybe they look similar but so do most touch screen phones mentioning no names HTC

I did have the Nokia e6 which was great but has a poor keyboard in terms of tactile feel.