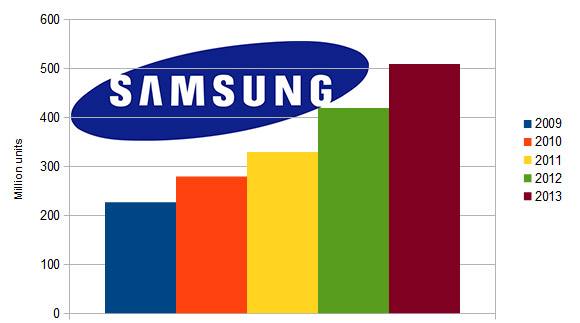 Samsung forecast for 2013: Will sell 500 million handsets during next year. This is a 26% increase over 2012 which the Korean company is estimated to sell 420 million mobile phones. Key Samsung supplier told Koreantimes that of these 510 million, 390 million handset will be smartphones. Android will be installed on most of these handsets, but to reach these numbers Samsung will also release a range of new Windows Phone 8 smartphones. According to research firm Gartner, Android had over 70% of the worldwide smartphone market share in 3Q 2012. Gartner has also predicted that Samsung will ship between 250 and 300 million smartphones in 2013. A much lower number than those reported by Koreantimes.

240 million smartphones will be assembled at the Vietnamese factory, 170 million units in China, 20 million in India and 40 million in the Korean factory. Samsung is predicted to be the largest maker of mobile phones in 2013. Replacing Nokia for the first time in 14 years. 29% of all mobile phones sold in 2013 will be made by Samsung.

DSF9 years, 11 months ago
They deserve it.
After HTC take-down (in smartphones department), now Nokia take-down. That's what happens with companies that doesn't care too much about their costumers needs

alenn9 years, 11 months ago
That's expected.I think I've read that as of now Samsung IS in front of Nokia...

Tsepz_GP9 years, 10 months ago
Shouldn't be a problem for them, they have an excellent strategy going. At this point, Samsung remind me of Nokia between 2005-2007. Galaxy S is what the N70 was, Galaxy S2 is what the N80 was and the Galaxy S3 is what the N95 was, S3 LTE what the N95-8gb was and Note2 being what the E90 was, and now is the time where they must continue to improve the strategy and not try to cut corners as Nokia did with the flagships after the N95, N95-8gb, E90 and N82.
They seem to understand how important it is to have one halo device once a year that is THEE high end to have for the masses, Galaxy S line, and then also to have a high end niche device that rounds up the range, Galaxy Note line, again, once a year. They then give priority to these two, and then create smaller versions for the mid end and low end for those who may aspire to own the top ends but maybe cant afford them or arent interested in all the high tech features but trust the brand and want a Samsung.