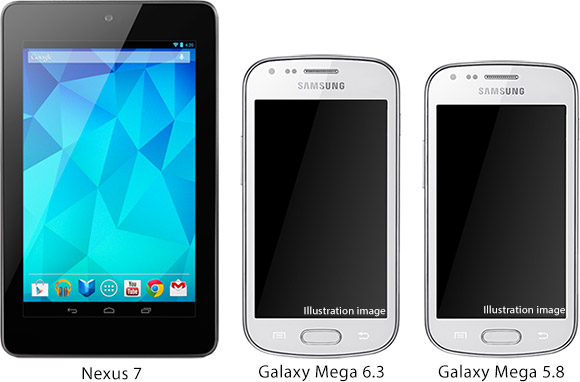 The two Samsung Galaxy Mega Android smartphones are something out of the ordinary. Galaxy Mega 5.8 will have a huge 5.8-inch display and the Galaxy Mega 6.3 phablet will have an even larger screen.

Galaxy Mega 5.3 will most likely be a dual-SIM model with a 540 x 960 resolution display. Having a large display is of course nice, but we think the resolution should follow too. This is not the typical AMOLED display that Samsung usually use on their high-end devices. According to SamMobile, the display type is TFT. Galaxy Mega 5.8 is powered by a 1.4 GHz dual-core processor and have 2 GB RAM on board. Galaxy Mega 5.8 runs on either Android 4.1.2 or 4.2.2 Jelly Bean.

Bonovox9 years, 8 months ago
Another Samsung phone with the same design,again

laffen9 years, 8 months ago
@Bonovox
We do not know what the new devices will look like. The image used in the article is just for demonstration of the unit's size.

No thank you Samsung

No doubt they will look similar

etaab9 years, 8 months ago
Probably.
But it doesn't matter, I suppose they'd be filling another niche in the market. Not for me though. Anything over 5" is getting too big. My S3's 4.8" screen is big enough for me.

xell9 years, 8 months ago
The supposed screen size of the Mega 5.8 is bigger than all of my Xperia P (which is the largest phone I own at the moment).

Although I think the size of screens need to stop somewhere

Just be glad it's no longer this your carrying

etaab9 years, 8 months ago
Well they cant get too big otherwise they become a tablet, like the 7" Note.
I personally don't think theres market for 6" phones. Where is the line between a 7" tablet and a mobile phone ?
I was considering buying a Nexus 7 the other day for my girlfriend, but to be honest its screen is too small for a tablet. Kind of defeats the purpose of a tablet.