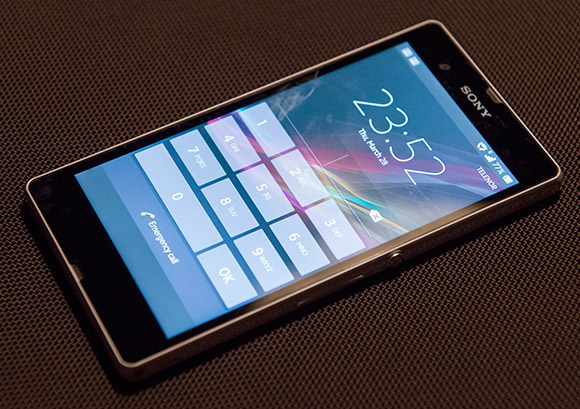 We have lately seen several security flaws when it comes to access of smartphone protected by a secret in code or other means of lock screen protection. No one seems to be immune to software bugs. The iOS bug made it possible to access limited amount of data on a iPhone while the Samsung Android bug would allow the user to gain access to all phone content by completing multiple steps of actions. This week, a Xperia Z owner found a way to bypass the lock screen on his Xperia Z handset.

We have verified that the Xperia T handset also is affected by the bug. Both our Xperia Z and the Xperia T are running Android 4.1.2 Jelly Bean. The instructions on how to bypass the lock screen is simple. Click on the emergency Call button and enter the following code: *#*#7378423*#*#. The number combination 7378423 is the same as "service" on a numeric key pad. Entering this code will open the service menu which is intended for service personnel. Once inside the menu, start the NFC Diag Test and click on the home key. From there, you should have full access to all content on the phone including messages and all apps. The bug will most likely affect all smartphones from Sony running version 4.1.2 of Android. As seen in the video below, Xperia Z and Xperia T are he two phones we have tested. The bug will let anyone with physical access to any of these smartphones to bypass the Face Unlock, Pattern, PIN or Password screen lock settings.

That really cracked me up!

Tsepz_GP9 years, 8 months ago
Its a damn shame


samsung was never even brought up on this thread... this is more of an FYI on sony phones' bugs/glitches.
kinda annoying to see another sony vs sammy "warzone".
can't we all just get along?

Away9 years, 8 months ago


samsung was never even brought up on this thread... this is more of an FYI on sony phones' bugs/glitches.
kinda annoying to see another sony vs sammy "warzone".
can't we all just get along?

All positives and negatives will be compared to their respective competition. That's why Samsung can and should be compared here. I found it as strange as randomuser did when people having a good laugh over this find the same issue in their 'infallible' and 'superior' gadgets. We are not here to have a war. But we can't hold hands either as long as the hypocrisy remains.

etaab9 years, 8 months ago
@ the pro-Sony / anti-Samsung sub-human species: the point you're missing is, nobody mentioned anything about Samsung or any other company for that matter and you bulldozed your way in to defend Sony and slag off Samsung.
Are you really that sad ?
Seriously, are you really ??