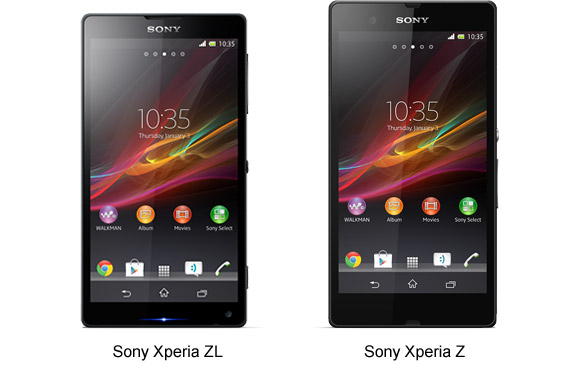 Images of the upcoming Sony Xperia Z and Xperia ZL Android smartphones has now leaked from the Sony web site. The Xperia ZL has the code name C650X Odin while Xperia Z has the code name C660x Yuga. The official specifications for the upcoming flagship models has not leaked yet, but CES opens on January 8th so we should not have to wait much longer. Both models are rumored to have a 5-inch display with a full HD resolution. 1920 x 1280 pixels on a 5-inch display is the same as impressive 440 PPI. Sony will probably issue a press release on Thursday this week as we can see the two images above has the date Thursday, January 3rd printed on the home screen. A strange thing about these leaked images is that the Xperia ZL seems to have the camera lens located below the display. A prototype of the Xperia Z (Yuga) has already been reviewed by mobile-review

For those of you following the Sony Xperia Rumors 2013 Edition discussion thread, all the above are actually "old news"

Bonovox9 years, 6 months ago
Wow,now ya talking Sony lovely devices and great specs. Lets see Sony compete with the big boys. Be nice if other colours follow black is boring

Supa_Fly9 years, 6 months ago
^ I hadn't thought of that really. Would be interesting if its a 720P/1080P camera for video conferencing.

goldenface9 years, 6 months ago
It works just as well in Landscape mode. May be Sony will introduce it's Face Tracking tech to ensure your face is always in the middle of the screen.
It's not long till announcement now and C660X should be on sale within weeks, if the rumours are true.

tranced9 years, 6 months ago
This will be a sweet gift for new year. Hope these phone won't be available in Q2.

dibdin9 years, 6 months ago
Looks very nice. Can see this replacing my Xperia S. I have read this is going to have dragontail glass...can anyone confirm or deny this?

DarkKrypt9 years, 6 months ago
Sony Xperia zl = Odin?
Sony Xperia z = yuga?
Confirm please?
And the zl has a camera button
Where as the z does not.
The zl has a led at the bottom centre of the phone
Where as z does not have any led notification?
The z is larger in size but both have 5' inch screen?
Comparison list anyone? Would be great.