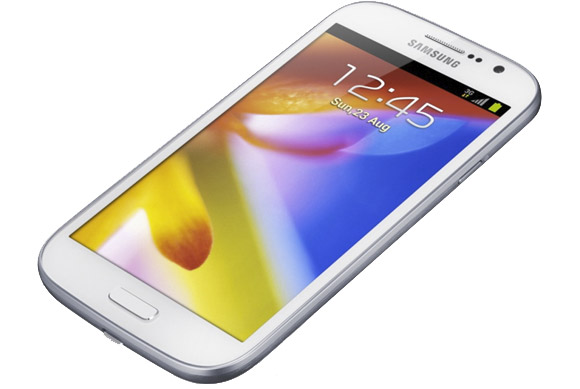 The Samsung Galaxy Grand is yet another smartphone from Samsung with a huge display. Although most of the Galaxy Grand specification could be categorized as mid- to high-end, the display resolution does not meet such high standard. A 480 x 800 pixel resolution on this large TFT display result in low 187 pixels per inch (PPI). Samsung knows that a large screen is attractive to consumers, so an affordable 5-inch model will probably be popular despite the relatively low resolution.

A 8 megapixel camera is the norm these days and the Galaxy Grand has a 8 megapixel main camera with a BSI sensor. The front camera mostly used for video chat can capture still images with its 1.9 megapixel sensor and record video clips with a 720p resolution.

Samsung Galaxy Grand runs on Android 4.1.2 Jelly Bean operating system released by Google this summer which introduced the Project Butter performance improvement. Google also released version Android 4.2 in November, but this latest version of the OS has so far only been available for the two Google tablets Nexus 7 and Nexus 10 tablets as well as the Google Nexus 4 smartphone

Bonovox8 years, 11 months ago
For goodness sake when will Samsung get some new designs

I can't tell the difference between any of them anymore. Design team need some imagination or sacking

rikken8 years, 11 months ago
If the price is right this will sell well

Design is not Samsung's forte at all. Now Nokia well all their new phones look good and look different from each other

I agree. If we look at the PC monitor market we can see that 27" monitors with a 1920 x 1080 resolution are selling well compared to the more expensive 2560 x 1440 models. The price is of course the most important factor here

Bonovox8 years, 11 months ago
People go for Samsung performance & software rather than design imo. Nokia previous generation of Lumia looked similar but not the latest bunch. Samsung have been looking the same or just bland and plain designs for ages

Tsepz_GP8 years, 11 months ago
I like Samsung's designs, very slim, simple and clean, the GS3's design grew on me.
The Galaxy Grand is for those who want a huge screen at a budget, although i must say the screen res is awful, should have been qHD (540x960) not WVGA.
WRT Nokia, i have to agree with rikken, Nokia's WP handsets all look like a N9 in a variety of sizes, the 820,710 and 610 are the only ones that truly stick out for me.

I can't tell the difference between any of them anymore. Design team need some imagination or sacking

Maybe they are taking a leaf out of the apple idea book....

Caspa8 years, 11 months ago
Yeah, that does look just like the others...
I'm with Bono on this one, they need to spice it up a little!

julias8 years, 11 months ago
If you think this is big then take a look at the 6.1-inch Huawei Ascend Mate