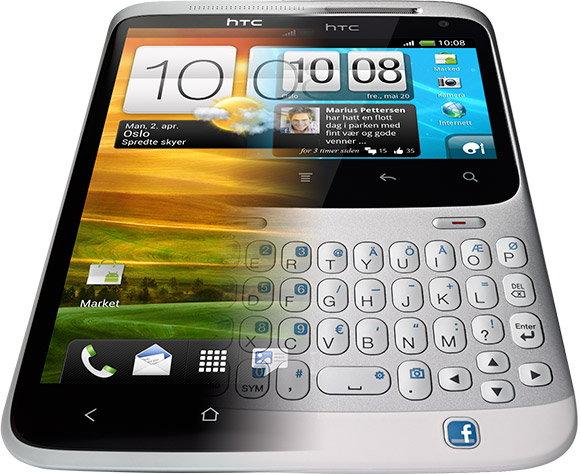 The latest HTC mobile phones announced this year are all full touch screen models. This indicates that HTC already has moved away from QWERTY models already. The last QWERTY model is the on the right half of the illustration image above; the ChaCha Facebook mobile announced one year ago.

Customers looking for QWERTY models will have to check out other manufacturers in the future. BlackBerry has a lot of QWERTY smartphones but that is not Android. Galaxy Y Pro DUOS from last year is one the latest we know of running Android, so the QWERTY models does not come often these days.

Editorial - Why does the Samsung Galaxy S III get all the buzz?

tranced8 years, 9 months ago
The physical and QWERTY keyboard is a feature that can't never be missed in a phone. I've been looking for an affordable Android with physical keyboard. I have some Xperia models: the SK17 and MK16.
Now I know I can't count on HTC anymore.

laffen8 years, 9 months ago
I think we have to go for Samsung, Motorola or even Sony if we want a QWERTY model with Android in the future. Maybe even Nokia, for those embracing the Symbian/Nokia OS.

My Nokia E7 has a great keyboard, but HTC's Touch Pro and ProII also were very good, aswell as their WP7 Pro, shame they don't produce them anymore, probably as a result of their plans to streamline their portfolio.
Still, I wouldn't want to be without a phone with a slide-out QWERTY, one of the two phones I have in daily use has to have it, so maybe I'll have to buy a second E7 as a spare ?

tranced8 years, 9 months ago
Even the Android Alcatel phones have no QWERTY. They're jumping to this ship as well.

dominiquelan8 years, 9 months ago
I can see why the candybar smartphone has more fans. Not everyone prefers it that way, though. Some would inevitably still look for keyboards.