HTC is not doing well at the moment. At least not financially. The Taiwanese company this week reported weak monthly consolidated revenue for the previous month. We have to go back to the first month of 2010 to see similar numbers. The new line of smartphones in the One series does not seem to reduce the falling revenue trend. For Q4 2012, HTC reported a quarterly revenue of NT$60 billion. The company also said that the outlook for this current quarter was around 50-60$ billions. In January, the revenue were 15,536 NT$ million. In February even lower with 11,370 NT$ million. To reach the goal of 50-60 billion, March needs to be a very lucrative month as HTC needs to increase the revenue to 23 NT$ billion. Hopefully, HTC One will be the smartphone that could help HTC gain momentum again. Sadly, HTC One will not be available in most markets before late March or in the beginning of April. 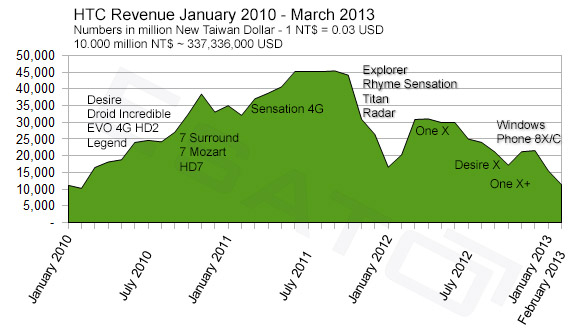 Bonovox9 years, 2 months ago
That's a shame,lets hope the One phone can help them. But I've not seen much in the way of adverts for it yet

Dups!9 years, 2 months ago
I said it last year that I don't see a way back for HTC. I still stand by that.

Away9 years, 2 months ago
The One won't save them it seems. No USP. The S4 is near, and then even the Z will have a hard time. At least it had a headstart, and has been selling well. My second favourite Android phone-maker will bite the dust. Their Nokia moment was when they didn't adapt to the changing times.
I hope I'm wrong, but I am still yet to see any sort of HTC One adverts in London. And if this really is their only flagship for the year and they don't sell their low-end phones at a better value, then RIP.

Miss UK9 years ago
I don't think HTC will RIP that easily, Samsung
May think they have there cake for the time being
But all the cake will be gone within time ( tech changes all the time )
It's what I love about apple so secretive know body knows
Jack

HTC may have the answer to blow Samsung away lol

Bonovox9 years ago
Yeah but Samsung are having their cake and munching it. Their sales are light years ahead of HTC