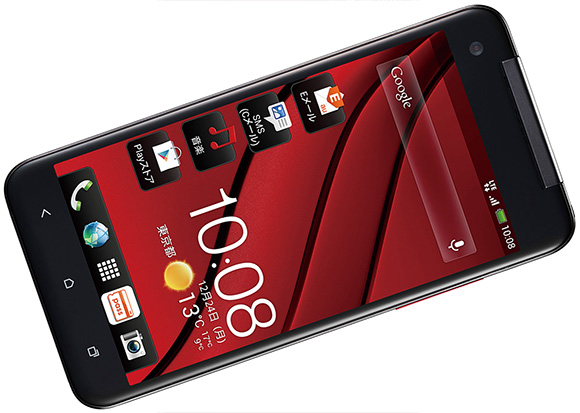 Currently, only customers of KDDI in Japan will be able to enjoy the HTC J Butterfly smartphone with a Full HD display resolution. Even though the HTC J Butterfly only will be available in Japan, it is a good indicator of what to expect in the rest of the world anytime soon. A 1080 x 1920 pixel resolution on a 5-inch display gives a pixel density of 440. Way beyond what the human eye can observer. Full HD is the same resolution found in most 50-inch TV's these days.

The HTC J Butterfly has a 1.5 GHz quad-core Qualcomm Snapdragon S4 chipset with a 320 Adreno GPU to process those pixels. The Snapdragon APQ8064 is companioned by a MDM9615 LTE modem which support peak data rates up to 100 Mbps. 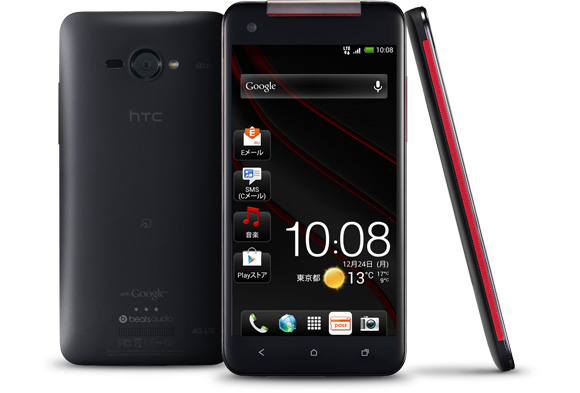 jcwhite_uk9 years, 7 months ago
Do they also give you a new pair of trousers with specially designed pockets so you can carry it?

I think it also comes with a special carrying case called a backpack.

nagirodu9 years, 7 months ago
In this Hands-On video of Theverge.com, one can see that phone easily fits into the pockets into the trousers.
http://www.youtube.com/watch?v=w-6_NTInl_s.

Bonovox9 years, 7 months ago
Very nice but with quad core and full HD screen,why such a paltry battery??

Bonovox9 years, 6 months ago
And here is a review of the American version of this handset. And,at last HTC have made an excellent camera!!!!!!!!!!!
http://www.phonearena.com/reviews/HTC-DROID-DNA-Review_id3191

https://www.youtube.com/watch?v=hi2ra1beQmc
Half way through he changes to front cam

Yakkaimono9 years, 6 months ago
Seems to be the same front cam as the 8X since both have a wide angle lens and record in 1080p.

Bonovox9 years, 6 months ago
Yes,HTC are moving up in the camera department

etaab9 years, 6 months ago
At a snails pace yes. Their cameras have actually been pretty good in the past. HTC were among the first to bring VGA cameras to the market with their PDA phones a bit like my XDAII.

Yakkaimono9 years, 6 months ago
Well their cameras didn't use to be any good a few years ago but then they upped their game on that in the last 2 years and the results are very good.
But recently they are taking some weird decisions in my opinion. A phone with specs like that and only 16GB non removal storage is very weird. Even the One X had 32GB.
I think they are just trying to capitalize on the upcoming holidays before they release a similar phone as a successor to the One X with eventually a bigger battery and more storage next year.

etaab9 years, 6 months ago
The more i use my SGS3 and play with other peoples Sense skinned HTC phones i just think its about time HTC lightened up their skinning of Android.
Touchwhiz is better imo, they need to give a little more pure Android look and feel and i think then HTC might even compete with Samsung. Sense feels bloated when i use it.
Oh and a name change might do them good. Lets face it, HTC sounds corporate just like LG, ZTE etc.
People like Apple and Samsung because probably, subliminally they have proper names like a friend. Not an abreviation of three words.

etaab9 years, 6 months ago
Do you not think its a good point though ? HTC sounds face-less, corporate, business jargon.

admad9 years, 6 months ago
Battery test shows pretty good results. Looks like they managed to upgrade the screen and leave battery usage at the same level, I must say I'm impressed. It has practically the same results as SGS III, whilve having twice as much pixels to feed.
http://blog.gsmarena.com/htc-[....]ry-tests-heres-what-it-scored/

Bonovox9 years, 6 months ago
Here is the full review
http://www.gsmarena.com/htc_droid_dna-review-853p3.php

On 2012-11-19 21:59:44, etaab wrote:
The more i use my SGS3 and play with other peoples Sense skinned HTC phones i just think its about time HTC lightened up their skinning of Android.
Touchwhiz is better imo, they need to give a little more pure Android look and feel and i think then HTC might even compete with Samsung. Sense feels bloated when i use it.
Oh and a name change might do them good. Lets face it, HTC sounds corporate just like LG, ZTE etc.
People like Apple and Samsung because probably, subliminally they have proper names like a friend. Not an abreviation of three words.

WHAT? Samsung is a corporate business & name (they do more than Smartphones, chips, storage/memory, fridges, washer/dryers, trucks, etc. they're the Korean Honda & Panasonic rolled into 1). Samsung is now a household brand so its easier to accept ... that comes with commercial success and end user recommendations. Apple is a common word in the english language along with a minimal reference to science (gravity) and religion (Christianism forbidden fruit). But I won't go further about either being accepted more than the other.
I agree about the "Sense UI" though ... HTC has been at that basic layout for over 4yrs now and debuted first on Windows Smartphone Edition 6.1/6.5 ... its getting old and needs to be replaced ASAP. Great hardware here but its only on Verizon so its not too useful to me.

etaab9 years, 6 months ago
But a single word name like Apple, Samsung, Sony, Motorola etc they're easy to remember. They're proper names even if they have romantic meaning behind them such as Apple. How many users do you think before they first ever heard of HTC phones upon coming across them said to themselves "H T what ?? H S B C ? ? H R T ?? oh HTC !? - got it !"
I did, i bought an O2 XDAII in 2004 and didnt have a clue who made it until i researched it. When i found out it was made by HTC i thought to myself, who the hell are HTC. I was also unsurprised the casing cracked so easily without the phone ever being dropped.
Since then, ive been a bit cautious of HTC devices because they've always seemed lower quality than the bigger names. From someone who once thought H T C who ?? i think its a good reason why they never get the same custom as Samsung and why even though this new phone looks great on paper, Samsung and probably Sony will make better phones in the new year to once again put HTC into second in the Android race.
As for Sense, i liked it on the One X, but after spending time with my SGS3 this past six months going back to Sense seems like using SPB Shell on Symbian - a replacement UI that is slow and bloated and does a worse job than it actually was intended to do.

Bonovox9 years, 5 months ago
http://www.gsmarena.com/butte[....]crease_shipments-news-5194.php
Selling well so it seems