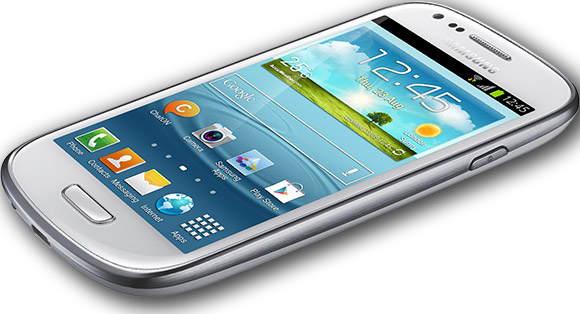 Samsung today announced the Galaxy S III Mini. Those of you expecting the power of the Galaxy S III in a smaller package will be disappointed. The Galaxy S III Mini is an entry/mid-range model with a 1 GHz dual-core processor from ST-Ericsson. It will be available in a 8 GB and 16 GB version. The 4-inch display is of the Super AMOLED type but the resolution is "only" 480 x 800 pixels which means that it has a PPI of 233. That is what we consider a bit low for a 4-inch model released in 2012 but in line with entry-level models from other manufactures. We know Samsung like it big having released several models with screen sizes larger than 4.3-inch. And we have taken notice of the fact that Samsung consider a 4-inch model to be Mini. A 5 megapixel camera is also an indicator that the price tag will be in the lower end of the scale.

Samsung is shipping the Galaxy S III Mini with the latest version of Google's operating system Android 4.1 Jelly Bean. It is interesting to notice that the amount of RAM in a entry-level device now are 1GB. Wi-Fi a has also found its way into the Galaxy S III Mini. Samsung obviously think that features such as GPS, NFC and Wi-Fi are essential for even budged phones so Galaxy S III Mini makes it possible for users to share content with Galaxy Note II or Galaxy S III owners using the S Beam feature utilizing the NFC chip.

Miss UK9 years, 3 months ago
What is the rough price of this going
To be?
My mother is still yet to purchase a touchscreen
Phone and she owns a Samsung E250 still lol
She is wanting to move up now
But she won't wanna spend a lot on
A mobile lol

Bonovox9 years, 3 months ago
Haha Samsung E250. Not sure of price probably around £260 or more. If she wants a decent Samsung at a good price the Galaxy Ace 2 is now £169 at Phones4U very good phone for the price

Miss UK9 years, 3 months ago
She kinda bought some huawei phone I don't know what the model number is but its a
touchscreen one, her E250 display is failing lol