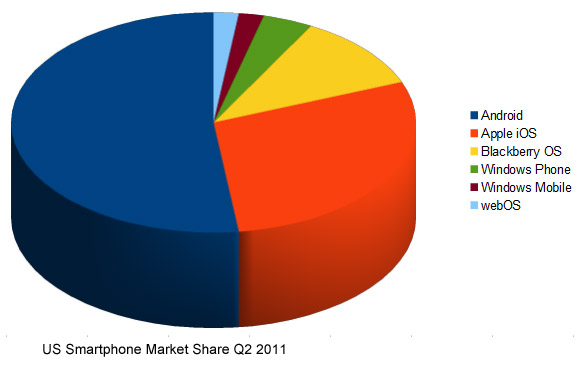 According to a report by NPD Group, Android gained 2% market share up to 52% from 50% last quarter. Apple also increased sales compared to first quarter. iPhone sales are now reported to be as high as 29% of total sales to U.S consumers. An 1% increase from last quarter. BlackBerry is still strong in the US and the OS has a 11% market share. The two previous quarters, Blackberry had a 19% and 14% market share. In other words, they loose ground. Windows Phone, the older Windows Mobile OS and the soon to be retired webOS share the rest of the 8% market share.

Symbian are not mentioned in the report, so Nokias old favourite OS had probably very low sales figures in Q2. Nokia are in the process of making Windows Phone based smartphones so we expect the low Windows Phone market share to rise slightly in the beginning of next year when they first Nokia handsets are available.

Three weeks ago, Canalys reported that Android also are the dominant Smartphone operating system world-wide. 48% is a little lower than the U.S percentage, but Android is still the leading world-wide smartphone OS.

The numbers in these data sets are done by NPD Group, and they are tracking U.S. consumers over 18 year of age who purchased a mobile phone during the quarter. Corporate and enterprise smartphone purchases are not tracked.