When we thought LG was out of surprises with 6 new models announced earlier this week, it is evident that the Korean company had saved the most powerful handset until the end.

The LG Optimus 4X HD is quad-core model with the 4-PLUS-1 Tegra 3 chipset from Nvidia on-board. We expect to see a couple of more 4-PLUS-1 processors during MWC. What Nvidia has done with Tegra 3 is to have 4 relatively high clocked cores in addition to a low clocked fifth core. The fifth core is clocked much lower ~500 MHz and runs when the handset is idle or doing simple tasks like playing music in the background. This saves battery power. The four other higher clocked cores only wakes up when the phone needs more processing power. It is interesting to notice that the soon to be released dual-core Snapdragon S4 chip (Krait) from Qualcomm could be faster than the Tegra 3 with a 4 (5) core CPU. Raw processing speed is not everything. As we and others have pointed out before: the software need to utilize those multiple cores before adding even more cores will speed up those slow apps. As a general rule, fewer cores can run faster than multiple cores.

Optimus 4X HD has a large 4.7 inch display with 720x1280 HD pixel resolution. The 2150 mAh battery is very powerful, so we are curious what the combination of a new quad-core CPU, very large display and powerful battery will result in standby and talk time performance. The display technology used in the Optimus 4X HD is IPS. 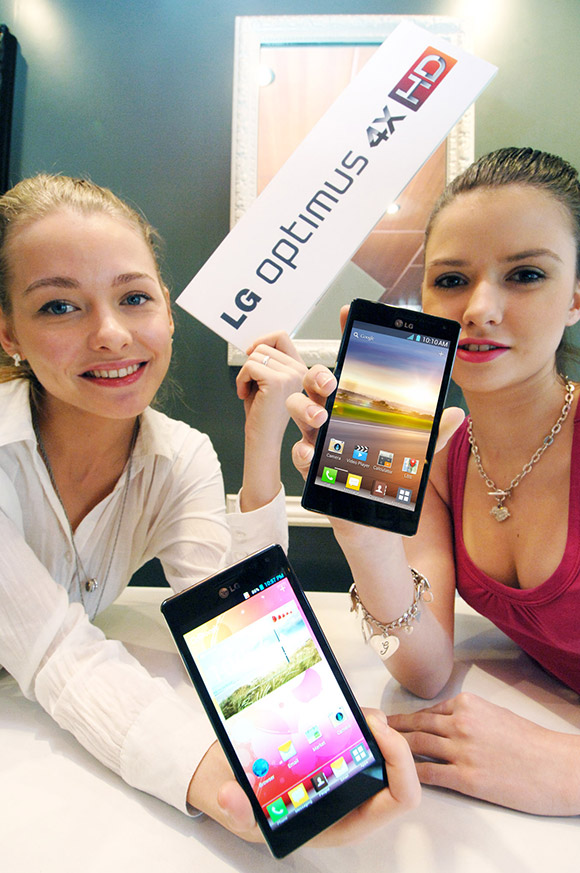 but what are supposed to do with that much power in a phone?

tranced10 years, 9 months ago
Just when you thought you didn't need more. This got a huge battery!

But it is too bulky for my taste

tranced10 years, 9 months ago
Don't worry. They won't count on you

Supa_Fly10 years, 9 months ago
VERY interesting ....
LG has this, while Fujitsu (hardly an unknown in the western world for smartphones) has same specs, but with LTE, and dust/water resistant coating (a la Droid RAZR).
VERY interesting times ahead since Android is not yet fully optimized for Tegra 3's full performance.

but what are supposed to do with that much power in a phone?

Why Pinky, we're going to take over the WORLD!