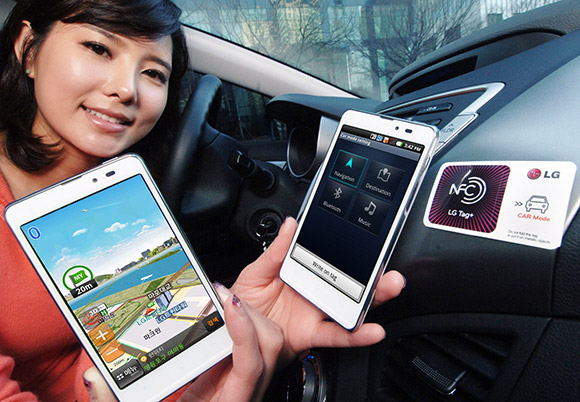 Dr. Jong-seok Park, CEO of LG Mobile said that the Optimus LTE Tag isn't just a cosmetically-enhanced version of Optimus LTE, it offers truly innovative features which we think really makes a smartphone smarter. We could not agree more. Reducing the display resolution from 720x1280 to 480x800 pixels and lowering the camera megapixel count from 8 to 5 are no enhancement at all.

Just like the Xperia SmartTags Sony Ericsson announced at CES earlier this year, LG has created NFC stickers / tags that can change the phone's settings. These NFC stickers will launch a pre-configured action or series of actions such as activate Bluetooth, GPS, launch a navigation app and increase volume when swiping the smartphone over a sticker in the car. LG call this feature LG Tag+ and this is where the phone model has got its name from.

The LG Optimus Tag Android smartphone is sadly only for the home market in South Korean.