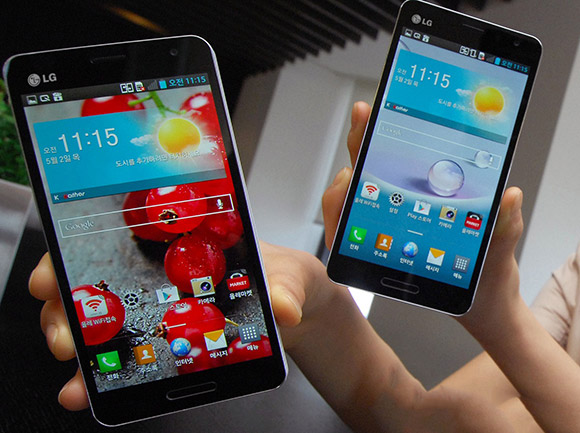 The Optimus GK seems to share the same specifications as the Optimus G Pro announced earlier this year. It has a 5-inch IPS TFT touch display with a 1920 x 1080 pixels resolution. The 440 pixel density is very high and identical to Sony Xperia Z, Samsung Galaxy S4, ZTE Grand S and HTC J Butterfly.

Further, LG Optimus GK is powered by the Qualcomm Snapdragon 600 quad-core processor clocked at 1.7 GHz. Installed RAM is 2 GB and the expandable internal storage is 16 GB. A 13 megapixel camera is assisted by a LED flash light and a 2.1 megapixel front camera. As with Optimus G Pro, the Optimus GK is able to record videos using both the front and back camera at the same time. The Optimus GK runs Android 4.1.2 Jelly Bean.

LG Optimus GK is a LTE/4G device with connectivity options such as Bluetooth 4.0, NFC, Wi-Fi a/b/g/n (5GH) and a USB 2.0 port. The 3100 mAh battery should have enough power to last for a day. Even though the Optimus GK is considerably smaller than the Optimus G Pro, the weight of 156 gram is just 4 gram lighter than G Pro.

LG Optimus GK will be available in the Korean market next month.

jameshopes8 years, 1 month ago
LG Optimus GK seems to be a good Smartphone. How much does it cost?

etaab8 years, 1 month ago
Is it me, or are they ripping Touchwhiz off with those colours and icons ??

Bonovox8 years, 1 month ago
LG been doing that for ages

maslahe6 years, 2 months ago
I like the design of the phone front and back,looks much better than on the prototypes
If I did not have the N7 it night have been my first LG
e six sigma
[ This Message was edited by: maslahe on 2015-04-23 18:50 ]