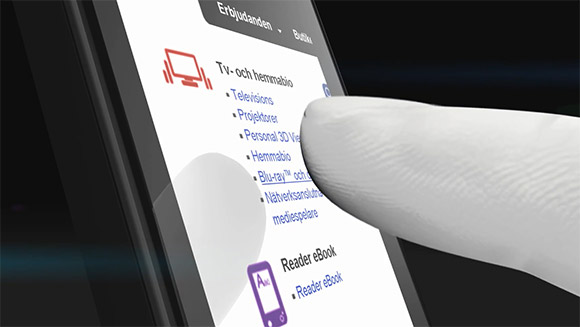 Today Sony Mobile unveiled the Xperia Sola Android smartphone. Besides having a 3.7 inch touch display and a dual-core 1 GHz processor the Xperia Sola introduces something Sony calls Floating touch. It will let the user navigate the web by hovering a finger above the screen so it acts like a moving cursor. As far as we know this technology currently only works with the built-in web browser. Sony will adapt the functionality to new apps in the future.
The Sony Xperia Sola is also a NFC enabled device and it will be shipped with two SmartTags which is something we took a closer look at last week. Touching the NFC tags with the Xperia Sola will instruct the phone to do up to 10 programmable tasks, such as powering off Bluetooth, turning on Wi-Fi and start an app.
Xperia Sola will be shipped with Android 2.3 but a free upgrade to Android 4.0 will be available within the next few weeks.

tranced10 years, 8 months ago
This phone actually catches my eyes. But I don't know why. It's not the floating touch thing but its design. It brings the same feeling I had when I owned the K750 for the first time. Don't know why.

It has to do with the back. For the first time in ages, Sony did what SE hasn't and made the camera look thick, beastly and even at 5MP I think it can do wonders. The front is also great, with the screen extended out ever so subtly to separate it from the bottom, and that bitching light is pure aesthetic gold. For 300 euros, with a slight drop in 2 months at an easy 200, I'd take it for sure.

jack0010 years, 8 months ago
this floating touch (also known as proximity touch) is used by wacom in their products since ... ever. but cool to have it on a phone, finally there is no need to buy smartphone gloves to use a phone in winter.

Bonovox10 years, 8 months ago
It's good but I imagine the floating touch thing a little awkward

etaab10 years, 8 months ago
So hows it work ? via the proximity sensor ?
I'd rather have the Xperia S though.

djin10 years, 8 months ago
Is there a front facing cam on this one?

anonymuser10 years, 8 months ago
Even in the Sony video posted above, "Floating Touch" looks incredibly awkward. I think to be innovative, there has to be some real point to the technology you're introducing, not just "we can do this so we will.."

etaab10 years, 8 months ago
Isnt the point of it so you can highlight something such as on a webpage without actually clicking on it as you can on a desktop computer ?
So basically it works the same way as the capacitive screen, just further away from the actual surface itself ?
I think thats innovative. Not entirely brilliant but a nice addition.

OffLineR10 years, 8 months ago
Why on earth this phone doesn't have a 8Mp Camera ???

djin10 years, 8 months ago
Every innovation is naturally criticized. I think having this would be great, I have several websites where i need to have something like this to be used because they are not optimised for phones. I really hope sony gets it into a higher end phone, and lack of front facing camera is dissapointing to me!