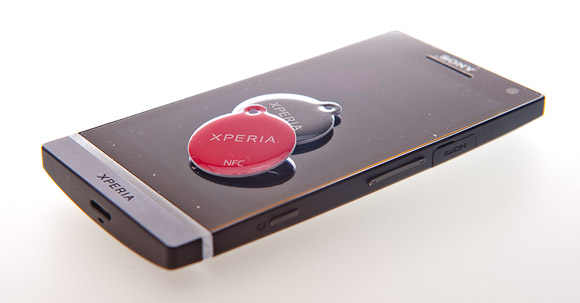 The SmartTags from Sony Mobile was announced at CES in January as a complementary accessory to the Xperia S. I was shown a short demonstration of these SmartTags during Mobile World Congress, and two tags was companioned with the Xperia S I have received for review. The Xperia S in our market (Nordic) has two of these SmartTags in the package.
Sony SmartTags are Near Field Communication (NFC) chips which communicates via radio signals when being touched by, or held near a NFC enabled devices such as a smartphone. NFC tags in general are dumb units and these particular tags from Sony does not store any information except a tag-identity. They do not need any dedicated power supply as they receives enough power via electromagnetic field generated by the initiating smartphone.
In the case of the NFC tags from Sony Mobile, all red tags are equal, and the same are the white, black and blue tags. This means that currently, a maximum of four different group settings can be programmed on the handset.
The number of included SmartTags found in the Xperia S sales package will vary from market to market but it is possible to buy a package of extra tags. An extra package consist of four different coloured SmartTags, and if you have the Xperia S you will most likely have received two of these tags in the sales package already. This means a Xperia S owner will have six SmartTags in total where two of those have the same colour. For a Xperia smartphone, these two pairs will be identical. I heard that the price for a package with four tags will cost about 15 Euro so these are not very expensive.

The maximum operating distance of a NFC tag is 20 cm, but Sony Mobile SmartTags must be held maximum 3-4 cm away from the backside of the Xperia S to be recognized by the phone. I talked to Rikard Skogberg over at Sony Mobile about the SmartTags and the Xperia S and he told me that the NFC chip inside the Xperia S is located where the NFC standard says it should be located. As close to the centre of the device as possible. Even though distance to the NFC chip is shorter than 3 cm, SmartTags will not be read by the Xperia S if they are touching the front side of the smartphone.
It is possible to let the phone respond to contact with the NFC SmartTags without having the phone switched on, but Sony has chosen not to let this happen. The Xperia S must be powered on and the display must be unlocked to communicate with a NFC tag. This is done to prevent the user from starting apps without his or hers knowledge. The new Xperia S has a new option in the Wireless & networks settings page. It's called NFC and let the user switch the NFC functionality on or off.

SmartTags must be set up by LiveWare manager or via the SmartTag widget. LiveWare will automatically add Xperia SmartTags to the list of apps that should start when connected to the Xperia smartphone. The Xperia S also have a dedicated Xperia SmartTags widget which let you see which profile is active, toggle NFC on and off and it has a shortcut to a series of favourite actions.
The pairing system is not super intelligent. An example of this is when the smartphone user have adjusted the display brightness, sound volume and switched on Bluetooth before touching a SmartTag at the office desktop setting the volume to silent, Bluetooth off and full brightness for the display. When the user leaves work, he might want to revert back to the previous settings. Currently, these are no way this can be accomplished in an easily. He could have "touched" another SmartTag on his way out, but the phone settings will not be exactly the same as before. Remember that sound volume can be set to Normal, Silent or Loud. Nothing in-between. This might not be an issue for you, but it is worth mentioning. 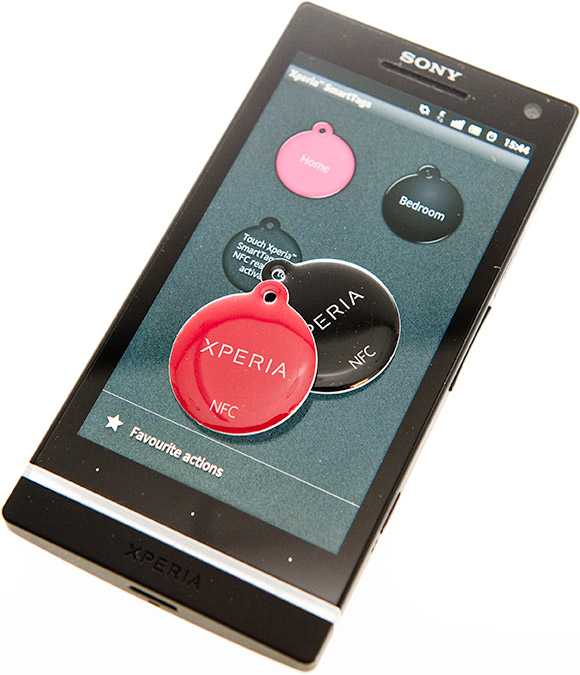 The list of possible programmable actions is long. These settings can be switched on, off and set to toggle (revert current settings)
Other possible actions are
Update April 28th:
Sony has released an update which is available for download via Google Play. The update adds support for Android 4 Ice Cream Sandwich and adds the following actions:
As you can see, there are endless combinations to be set. A typical setup for the SmartTag in the car might be Bluetooth and GPS On, Sound set to loud and start the navigation app. If you are like us, the first thing I do in the morning is to adjust a couple of settings on the smartphone. For example turn on sound, Wi-Fi and Auto-sync. This is where the power of such queue of actions gets interesting. By using the SmartTag system by Sony, automatic tasks can be accomplished without the need of switching services on and off manually each time. There is a limit of maximum 10 actions to perform per SmartTag. One action I miss is the possibility to insert a delay between two other actions. I would prefer to let the phone have enough time to connected to a Wi-Fi network before opening a URL for example.

As I already mentioned, only four different SmartTags are available for sale. I am convinced that Sony soon will need to expand the range of available colours based on high user demand.
Tags: sony xperia s xperia smarttag review