Earlier this week, the mother company Sony also announced reorganization of the company structure where several Japanese Sony old timers were promoted and given impressive titles. On April 1st, Kazuo Hirai became the new Sony President and CEO while Howard Stringer stepped down but he still has a role as a Charmian of the board.

The new President and CEO of Sony Mobile, Mr. Kunimasa Suzuki will assume responsibility for planning and design in relation to all consumer related products and services. He will also oversee the mobile business including smartphones, tablets and PCs.

This means that Sony Mobile from now on will have a CEO which is responsible for Sony's mobile, tablet and PC business. The positive is that he will be better see the bigger picture but that means that he will have to spend less time on each division. Kunimasa Suzuki will be based in Lund, Sweden and Tokyo, Japan.

According to Kazuo Hirai, Mr Suzuki is "a strong leader and the right person to oversee Sony Mobile Communications as we establish a new business structure as 'One Sony' intended to reinforce and accelerate our overall business management" This raises the question: Was Mr. Nordberg a weak leader and the wrong person for the job, or is the rearrangement of positions just done to please the stock holders?

The new and old CEO of Sony Ericsson / Sony Mobile: 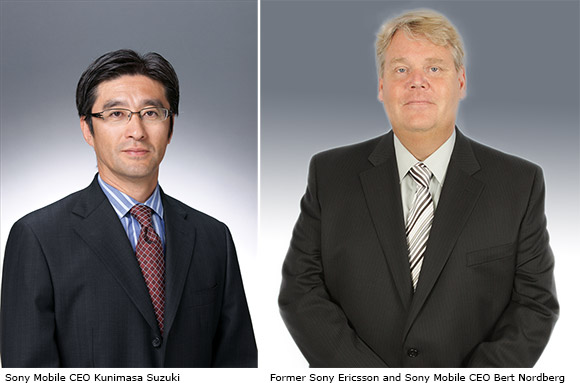 Thanks for everything Bert and welcome to the stage Mr Suzuki.

Do you think this company reorganization will gain Sony Mobile or will it be business as usual with no effect on Sony's future smartphone strategy?

tranced10 years, 3 months ago
Wish him good luck and hope that his work will be much better than Norberg.