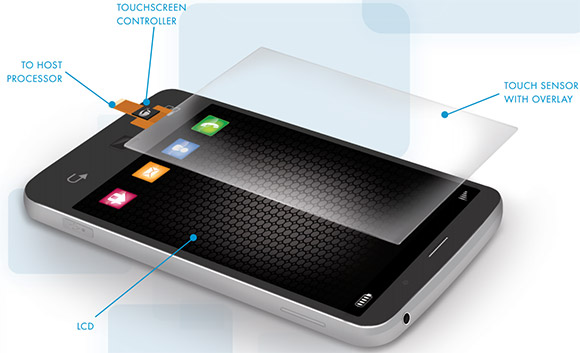 Like all recent smartphone touch displays the Xperia Sola has a capacitive display. Unlike resistive touch display, this technology does not require pressure from a finger or stylus to the display to record a touch event. Capacitive touch screens does not rely on pressure but it is affected by something conductive such as a human finger.

Sony Mobile has developed the new technology in cooperation with Cypress. A company that has shipped over 500 million touch solutions. From GPS systems and tablets to cameras and mobile phones. Sony claims that the display sensor is able to detect a finger up to 20 mm from the surface while Cypress says on its website that the distance is maximum 10 mm. Regardless of distance, the user will not have to touch the display surface for the phone to recognise a touch event. For the first time, it is now possible to use those glows on a smartphone with a capacitive display.

Knowing how the floating touch technology works is only part of the fun. The interesting thing will of course be when we will see app developers using this for better, quicker and more intuitive user input. Other very useful touch screen inventions we now take for granted are double tap, flick, two finger scroll, pinch, rotate and many more. We should probably add Floating Touch to this list as it is yet another way for touch screen devices to accept user input. Cypress calls the technology for "hover", a phrase which should be familiar to web developers. Without being too technical, a mouse moving over a text, image or any other web page content can have its "hover" style set by the web page CSS attribute. In JavaScript the same thing is called "mouseover". Example of hover behaviour is to remove underline on link when the mouse is located over the text.

Sony Xperia Sola is the first smartphone in the world to have a floating touch display, but very few Android apps are able to record these new "hover" touch events. Currently, only the built-in Android web browser support Floating Touch. In the upcoming Android 4.0 Ice Cream Sandwich upgrade for the Xperia Solo, third-party developers can use the Google API in apps to handle hover events.

Nokia: We are working on a tablet

chunkybeats10 years, 2 months ago
This is very exciting technology! Good work Sony! This will be very handy if your hands are dirty and you need to use your phone quickly!
Please develop more for this tech!!

OffLineR10 years, 2 months ago
At last we see Sony with innovations

darrenj110 years, 2 months ago
I figured out the use of this, when you are viewing webpages, and the links are very close together, you can move the finger over the links and they will highlight, before you press the screen, ensuring you get the right link.

tranced10 years, 2 months ago
And without patent infringement.

It's just a matter of time when we will start seeing apps taking advantage of this function. Just like the NFC.

etaab10 years, 2 months ago
Its just a shame they didnt stick it in their flagship device..

tranced10 years, 2 months ago
Maybe they will. They're just testing with this one.

goldenface10 years, 2 months ago
I'm wondering if they will expand this functionality to other parts of the UI. It's quite clever.