A patent filing from 2003 shows a device strikingly similar to the N93 (pictured below) with claims that it will have a multi directional hinge allowing the phone to be used in a variety of configurations.

The patent was filed before Nokia developed the N93 so it is surprising that there has not been any legal action by boys at Sony Ericsson. source:mad4mobilephones 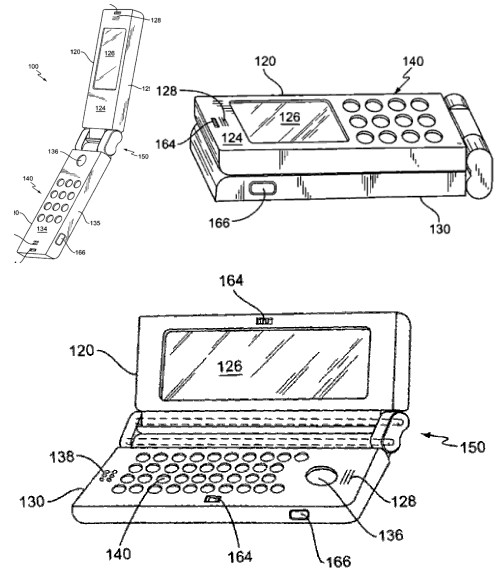 Esato Rumour: Is this the Sony Ericsson K850 aka Sofia?

Comments
On 6 Feb 14:55 Richard wrote
There is no twist function I can see in either of these handets. There is the ability to "flip back" to have either surface be the exterior of the handset, however.
On 6 Feb 14:38 antichrist wrote
the ability to be used in a variety of configurations allowed by the multi directional hinge is USELESS!!!
On 6 Feb 06:56 Ranjith wrote
n93 has a nice catchy design,but too bulky...hope SE makes a compact one!!
On 6 Feb 06:08 rehamer wrote
its more of the bravia design in japan.
On 6 Feb 05:20 p990i wrote
they are only the same in flip style after that its unique.
On 6 Feb 03:24 andre wrote
i dont seee n93 anywhere in that patent...thats why theres no legal action
On 6 Feb 01:07 sea wrote
i think the 'twisted' screen is the point there....
On 6 Feb 00:39 SloopJohnB wrote
I don´t see Nokia N93 there...