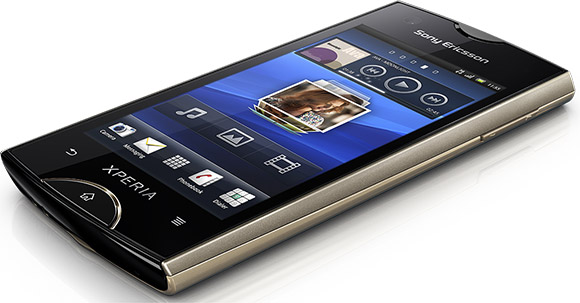 Sony Ericsson Xperia Ray is a designer model with a relatively small 3.3 inch touch display. The 480 x 854 pixel resolution on a 3.3 inch display give us a pixels per inch (PPI) of 296. This high number rank the Xperia Ray as number 13 of the phones listed in our phone database. Other well known models with high pixel density are iPhone 4 (329.64 PPI), Nokia E6-00 (325.20 PPI) and LG Arena (310.98). Increasing the number of pixels without making a larger display makes text and graphic look more smooth, but when reaching one point, it could make the default text size too small. Esato has only one phone model listed in the database with 3.3 inch display combined with a 854 x 480 so the screen is first of its kind. Xperia Ray, or Xperia ray with a lowercase R as Sony Ericsson choose to call it, has many of the features found in Xperia Arc and Xperia Neo. The screen resolution is the same, but also the 1 GHz processor, Reality Display with Mobile BRAVIA Engine and the 8.1 megapixel camera with Exmor R for Mobile. If the camera is identical to the Xperia Arc and Neo, you should expect nice low light performance as we found out in our Xperia Arc review. The 3.3 inch display size is of course smaller than Xperia Neo's 3.7 inches and Xperia Arc 4.2 inches, but as we have seen with the Xperia Neo compared to the Xperia Arc, decreasing the screen size will result in much better battery performance.

In selected markets, the Xperia Ray sales package will include a LiveSound headphones. Available Xperia Ray colours are Black, Gold, White and Pink 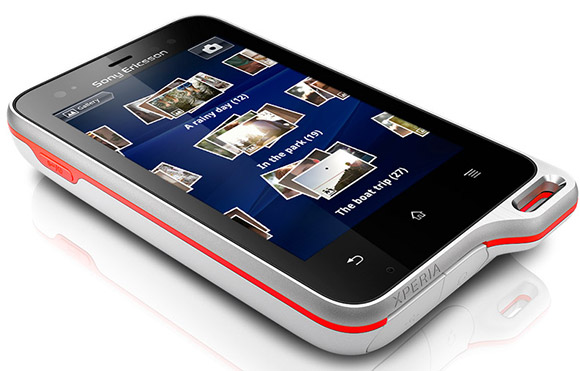 Observant readers will notice that both the Xperia Ray and the Xperia Active has touch keys instead of hardware keys. We prefer the physical feedback given by pushable keys, but without them, the front side of the phone get a more sleek and stylish form. Sony Ericsson has kept the dedicated camera key as well as volume controls and the power key. A very visual hinge makes it easy to attach the included wrist strap to the phone. The built in GPS, barometer and compass in addition to ANT+ support are good news for those wanting to replace their Garmin or Polar fittness product. ANT+ makes it easy to log heartbeats and bike cadence using third party accessories. The pre-installed iMapMyFitness app could be one of the apps usefull for this, but there are other free apps in Android Market such as Endomondo Sports Tracker used by million others which could do the same thing.

The Xperia Active also has the four corner home screen shortcuts which often are found on Sony Ericsson phone models with small screens. These extra navigation icons are convenient for one hand navigation.

Sony Ericsson txt
The third mobile phone announced was the Sony Ericsson Txt messaging phone with a dedicated SMS shortcut. It is a block model with a full QWERTY block. It could easily be mixed with the Sony Ericsson Txt Pro announced two weeks ago, but the Sony Ericsson Txt is a feature phone running on ST-Ericsson RTKE operating system. The list of features are basic. The Txt has 2G network support, a 3.2 megapixel camera, a 2.6 inch display and 100 MB available memory. The battery capasity is remarkable low. A fully charged 1000 mAh battery is claimed to last for only 196 minutes / 3 hours 12 minutes. Either the reported official specs are wrong or Txt is the phone model from Sony Ericsson with the worst talktime ever.

All three phones will be available in Q3 this year.