According to Andy Rubin, the co-founder of Android Inc, now Senior Vice President of Mobile at Google, the number of activated Android devices are over 500.000 every day. The claimed numbers seems reasonable as they are following a trend we saw back in December last year. 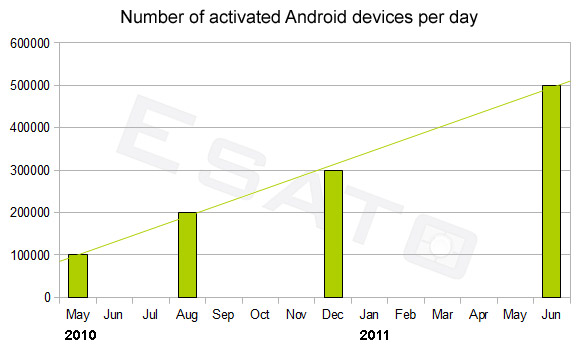 Skype with video call for Android

Tsepz_GP9 years, 3 months ago
Lol, everytime Andy Rubin tweets Android growth stats i remember the Android haters last year claiming it couldnt take the top spot from Symbian, speaking of Symbian, why has Nokia stopped posting how many Symbians are activated a day???

They were more than happy to last year, whats made them change their mind??? hehe...
Absolutely amazing how fast its grown, it is actualy sucking the life out of some of its competitors, cant wait for Ice Cream Sandwich to be completely revealed, i get the feeling this is just the beginning of world domination.

goldenface9 years, 3 months ago
Amazing growth and there seems to be no stopping the Droid invasion - RUN FOR THE HILLS!!!!

skblakee9 years, 3 months ago
I see no way for others to stop Android any time soon. Let's go 1 million!

tranced9 years, 3 months ago
Android has shown what it is capable of. Now it's time it shows more stability. Android, compared to other OS, is a little bit unstable. I hope they're going to get it all done with the Ice Cream.
BTW, it'd be good to see another The growth of Android - A visual tour...again.
@skblakee: I never thought you weren't gonna make it

fbloise9 years, 3 months ago
Tranced:
True, specially when comparing to apps for iOS or even Palm Pre. Lots of FC in their Android counterpart.

tranced9 years, 3 months ago
iOS is in its 5th version while Android's version 3. Hopefully they'll be fully bugless in a near future.