The two new mobile phone models are low end / entry level models. We do not have any exact price for the two, but we expect the price to be around Euro 230 just like the Xperia X8 when it was new. Both phones will be availble in Q3 in selecte market. Which market this is is also unknown, but we think Asia, Africa and some parts of Europe would be a good guess.

Sony Ericsson is proud of the success they have accomplished on their Facebook page which is to attract more than 5 million followers. Sony Ericsson held a competition a short while ago where four competitors received a free phone in the mail for the purpose of doing a short video review. The competition was to guess one out of three names for the two new phones. We guessed right.

Both phones has the now familiar four customizable corner keys we first saw in the Xperia 10 Minis for easy navigation. The operating systems looks like Android but they are not. Txt Pro is running on Sony Ericsson Proprietary OS while Mix Walkman is running on RTKE OS by ST-Ericsson. Besides the OS and the QWERTY keyboard on the Txt Pro, the two phone models have many similar features:

The Mix Walkman has a special key name Zap for a preview of the chorus in the next song in the music queue. Press the Zap key again for play the next song from the begning. 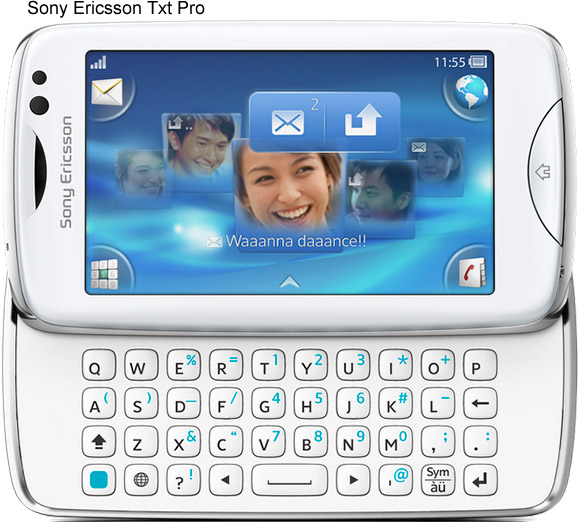 masseur9 years, 2 months ago
to keep presence in the low end of the market as some people in some countries can't afford the mid-high end range

tranced9 years, 2 months ago
Decent battery, nice keyboard (although the should have added de direction keys), and I think this is ideal for not so wealth countries. I was wondering why they're not 3G. But then I thought: they're not android devices. At least it's what I think.
Sorry to go off topic, but in DR we are not as wealth as other places, but there are people having iP4, Torch and so on.

, If priced right I can see these selling a lot here in the Philippines. Most people here can only afford to spend up to that much on a phone, and some people just use the basic functions of the phone anyway so there is less demand for high end phones than in some other wealthier countries.
I myself used my year and a half of savings from my allowance just to buy

Hazel.
Back on topic, these phones look nice, still way better looking than other touchscreen budget phones made by other manufacturers.

mustafabay9 years, 2 months ago
What's with the two different OSes???

tranced9 years, 2 months ago
Wierd, isn't it?
Could be the case they're just trying this new one. They'd think Android is for Xperia devices only.

Bonovox8 years, 10 months ago
I seen the Walkman model in Phones4U for £79. But it is crazy when you think that the Xperia X8 is now roughly the same price. It's a no brainer really. But I see these as phones just for kids really.