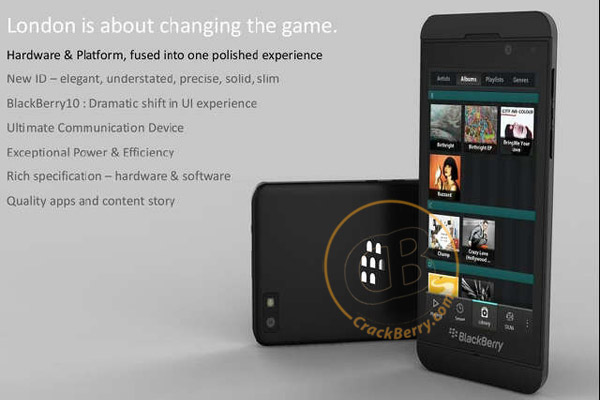 BlackBerry is still live and kicking. The site crackberry.com received some this illustration image of the supposedly next generation BlackBerry smartphones running on BlackBerryOS 10. Apart from a touch screen and a main camera with flash, the image does not reveal much. The name of the device will probably be London and the OS will be BlackBerry OS 10.

Regardless if this smartphone has high specifications and a beautyful screen, the BlackBerryOS must compede against very aggressive platforms like iOS, Android and Windows Phone. Back in the old days, it was only Symbian that could threaten the Canadian OS. Only time will tell if RIM are able to release new exiting handset in the same pace as those designing for the much larger platforms.

BlackBerry has lost a great deal of the world-wide smartphone OS market share, but the Canadian phones are still popular in certain countries such as the U.K. Elsewere in Europe, the BlackBerry series sold more units last year compared to 2010, but the market share dropped. RIM ordered a market share report from GFK for BlackBerry in the UK and they came up with an impressive 26% market share. Research firm Gartner on the other hand reports that BlackBerry has fallen from 23% to 19% in the first 9 month of last year. In the US, BlackBerry market share has fallen even more. From 7.7% in October 2011 to 4.5% in December.

RIM has just recently made some important management changes in the organization. Throsten Heins has been name as President and Chief Executive Officer after the founder Mihalis Lazaridis. Mr. Heins came from the position as the COO for product and sales.

RIM will be present at Mobile World Congress later this month, but rumors has it that no devices running BlackBerry OS 10 will be announced.

Howard Stringer steps down as Sony's CEO in April

djin11 years ago
looks good! Hope blackberry turns around this year and release some good phones! Hate too see it go down, even thou i do hate it in general

Bonovox11 years ago
I am wondering if finally they will make an 8 meg camera.

Miss UK11 years ago
Poor Blackberry they have been getting alot of slack over the last couple of weeks
can't believe knowbodys even bothered posting it up either although im not surprised!

tranced11 years ago
Not a fan of BB, but assuming this will be the real deal, they've finally seen the trend everybody is wanting in a phone. I mean the design of the phone.

mchen10 years, 1 month ago
blackberry must come up with something like nokia lumia620 with all the user demanding features.on the hardware side, a decent qualcom 1g-dual cores cpu,high ram and rom,a decent 5mp A/F camera 1500ma battery etc..and most importance of all-it pricing around RM 850~950.Bigger lcd torch screen and of course bb qwerty keyboard a must!.
also good audio playback and lastly if BB can work out with local Telco
on affortable BIS prepaid plan.
I am not a BB user yet,but I want BB back to live and compete with others vendors.

skblakee10 years, 1 month ago
I was hoping Samsung would have bought them out long time ago but since they have reached this far why not they give it another try. BB could very well turn out to do very well if their phones can compete with Android beasts and the iPhone

jcwhite_uk10 years, 1 month ago
BB10 is gonna be very good for Blackberry as it looks like it will be a very good OS but will it be too late to save Blackberry? A lot of Blackberry users have already switched to IOS or Android (including me) and I think it will be hard for RIN to attract users back to Blackberry once they have moved away.

On 2012-02-02 02:47:18, Miss UK wrote:
Poor Blackberry they have been getting alot of slack over the last couple of weeks
can't believe knowbodys even bothered posting it up either although im not surprised!

The first article is OLD news - back in early May 2012; yet the date of the article is January 2013; LMAO.
Some information for those that don't know.
Co-CEO Lazaridis isn't part of RIM any longer (he's heavily focused on Quantum computing), yet he still has a majority stake in shares! He is still a member of the board of directors at RIM (Mike Lazaridis). Jim Ballsilie step down due to a huge and brutal shake up; yet still owns shares in RIM.
The current CEO, Thorsten Heins, has been elected as such by the former Co-CEO's and was already in motion in slow stages since 2011; hurriedly rushed due to outrage of big analysts and share holders. January 22, 2012, Balsillie, along with Co-Chief Executive Officer Mike Lazaridis, resigned his position, to be replaced by RIM Chief Operating Officer Thorsten Heins.
BB10 runs on QNX Micro-Kernel OS ... and their NOC (Network Operations Centre) is overhauled runnign this!
QNX is not just for their BB10 OS and devices (PlayBook is already running it at its core, yet promised for BB10 unified update), but mostly for their machine to machine strategy.
Links:
BB10
http://www.youtube.com/watch?v=mWwu-U-yk_c
http://www.youtube.com/watch?[....]e7tMDGSGzJdu4LsTEPwyL-G8TmIzGl
http://www.youtube.com/watch?[....]e7tMDGSGzJdu4LsTEPwyL-G8TmIzGl &
http://www.youtube.com/watch?[....]e7tMDGSGzJdu4LsTEPwyL-G8TmIzGl
^ think of BlackBerry Fusion management server software or upcoming BES10 in May 2013 that replaces it ...
Here is a glint, or a hint of Machine to Machine business
http://www.youtube.com/watch?[....]e7tMDGSGzJdu4LsTEPwyL-G8TmIzGl
(remember 90% of cars sold since 2001 have QNX at the core of their on-board computers, not just the MMI system you normally play with: MMI = Stereo, DVD/GPS navigation, etc).
QNX Customers:
http://www.qnx.com/company/customer_stories/
Acura
AdTran
AECL
Audi
BMW
BTI Photonics
Caterpillar
Chrysler
Ciena
Cisco Systems
Daewoo
DragonWave
Emerson Process Management
Fortna
General Electric
GM (General Motors - uses this for their On-Star solution)
Hyundai
Infinera
Intalysis
JDSU WaveReady
Kieback & Peter
Land Rover
Novar/Honeywell
Porsche
Precitech
Renault Samsung
Saab (their still a company??)
Tridium
US Postal Service
QNX-in-Education Program: For academic faculty (not sure how this compares to Apple's iTunes U)
http://www.qnx.com/company/education/#details
QNX automotive software stack:
http://www.qnx.com/solutions/[....]tomotive/#technology-services1
QNX Ecosystem within the cars and what it works with:
http://www.qnx.com/solutions/industries/automotive/#ecosystem
Note: Analysts are ONLY focusing on BB10, the product announcement, the sales, and partnerships & pricing by carriers globally (which have shown huge interest: verizon has a leaked BB10 branded, Rogers Wireless and Bell already have pre-orders for BB10 product, Bell a contents for 5 free ones, over 100 carriers globally will be launching BB10 from the start, others awaiting). The "END" game for RIM is NOT BB10 product and services ... its about QNX and Machine to Machine servies ...
http://www.marklives.com/word[....]pt-2-secrets-of-blackberry-10/
AG: That data layer across most networks globally sounds like an incredible strategic asset â BlackBerryâs secret weapon. How do you plan to leverage it?
TH (nodding vigorously): This is the secure, reliable connectivity layer for mobile computing that sits on top of carrier networks. They can run their own services across it, but the secure layer on top of this, globally, will come from us.
Think of a car manufacturer that sells cars globally, and needs to address all in-car computers from a certain series, and get a message out, like âPut the car in the garage for the next 24 hours because we are giving it a big software updateâ. How many vehicle recalls do you see these days? Imagine the time and cost that can be saved if we can provide telemetry data from all these cars, on a globally connected system, and with the endpoints managed for reliability and security.
There is so much to do right now â it is overwhelming in terms of priorities. RIM needs to figure out where to be the enabler, and where to utilize our own servers. But the opportunity is huge: mobile computing, end-point management, APIâs created to add sensors to devices, using the mobile data network for distribution â basically any vertical application where we think we have a play, and where we can use our push and compression services.
Smartphones and tablets part of it, but they are not the only purpose of the company.

PS: I work with BlackBerry/BES and iPhone's where I work, its part of my job to keep my ear on the pulse of corporate mobile management. ActiveSync will be used by BB10, wether or not this will be compressed through their NOC for consumers or corporate BES implementations is still "unknown" to the public.

Bonovox10 years, 1 month ago
I have had one BB phone the 9790 and it was nice phone but not really been a fan of BB phones to be honest. Although with them going full throttle touch screen I would give it a go for sure. I found BB qwerty phones the OS to be rather over complicated, messy,dated and more I can't think of right now. But this will be interesting to see how it will look and feel.

Supa_Fly10 years, 1 month ago
Well ...
Codes supported:
C++, QT, HTML5, Flash/Air (to a lesser extent), and QT. Other platform vendors to help with porting as well. Funny enough RIM's oldest BB line used C++ before moving to Java due to security, QNX core allows for more robust security ... the old BB Java OS has been mashed up to do what it can yet was never designed to take it to current setup; and nobody is around to start it being overhauled; die BB CLDC/J2ME die!!
109 big companies are already finalizing apps, many many other developers (in company's or freelancers are also working hard).
FourSquare, Cisco, FaceBook, Twitter, Yelp, etc are already on board. Box.net is heavily tied into the UI and has full API access - yes BB10 is open and no API is restricted. In fact a new API was created specifically for EverNote and similar type of apps.