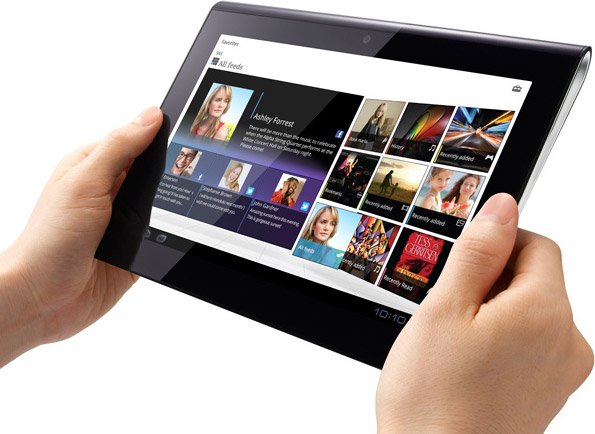 Sony was late for the tablet table but the wait might be worthwhile. It has been discussed wheter Sony or Sony Ericsson would be the tablet provider of the two. It could of course be both companies but we doubt that Sony will start competing with itself.

The two new tablet was announced with the code name S1 and S2. The final name will be announced at launch this fall.

This is the Sony S1 as seen from the front. It has a front facing camera for video call. As you can see no hardware buttons are located on the flat surface. The illustration image below can be TimeScape for tablets where various social feeds are gathered in one application. 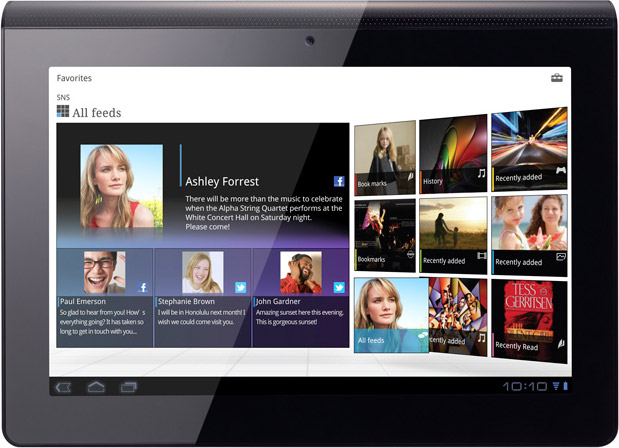 The picture of the Sony S1 backside tells us that the tablet has a main camera located on top of the device. It is PlayStation Certified and it might have a memory card slot located in front of the device (bottom of this picture). Two rubber nubs are seen to the right and left of the for secure placement of slippery surfaces. 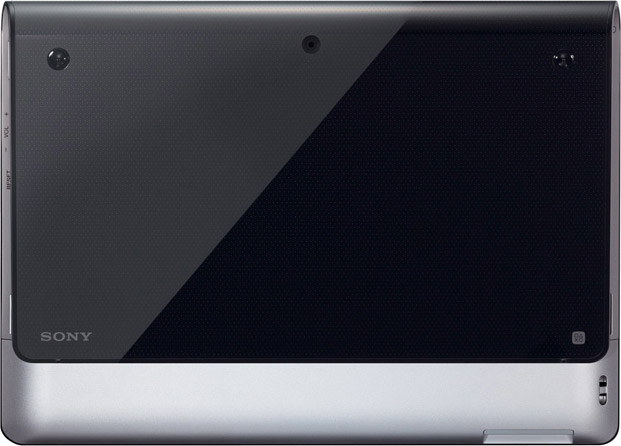 This is the Sony S1 seen from the right side. The power button, volume keys and reset hole. To the left on the picture you will see one of the two stereo speakers. As the S1 specifications could be changed later Sony has not given out much of the technical details, but we know the screen size is 9.4 inch large and that makes it possible to calculate the rest of the dimentions. We have found out that the S1 dimensions must be close to 249 x 173 x 21mm. The thinnest section of the S1 is aproximately 10mm thick.

Rumors has it that the S1 has a infraread sensor which should make the S1 a very high tec remote. 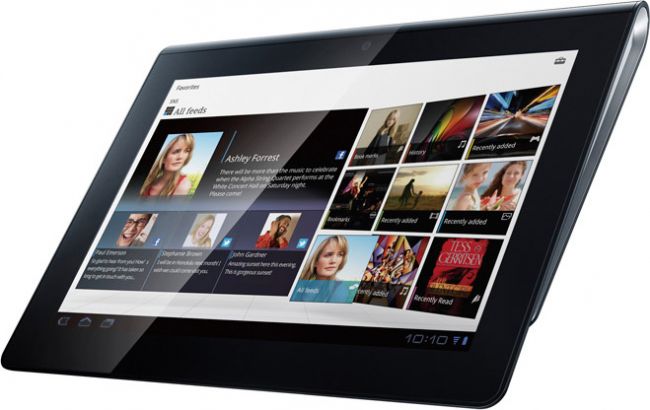 Sony S2
Sony "S2" was the second tablet announced yesterday. This is the most interesting one in terms of design and size. While the S1 has a more traditional tablet form factor, the S2 which its folding form might not be for everyone. Splitting the display in two is not done because users want such displays, but because this was the only way to keeb the size of the tablet so small. It is the first time we have seen a Android Honeycomb tablet with two screens, but not the first Android device. As we wrote yesterday, the Kyocera Echo with its dual 3.5 inch displays are running on Android 2.2. The Echo has two 800 x 480 pixel displays and we have reason to believe that the S2 will have a 1280 x 800 pixel resolution. 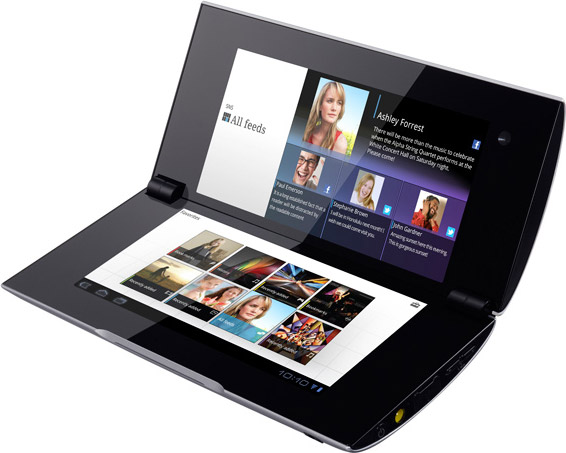 There are no hardware keys inside the folded S2. Apart from the two displays, it is only the front facing camera that is visible. Android 3.0 Honeycomb can be controlled entirely by touching the screen. Also notice the visible and solid looking hinges. The only place we have seen traces of connectors and keys are on the right side of the device. We can see a power button, 3.5 audio jack, volume keys and something that looks like a micro USB connector. More interestingly is what we don't see. A memory card slot. Will Sony release a tablet without the posibility to add more memory? We doubt it. The product images seen in this article are computer generated, so the card slot could be added later in the production line. 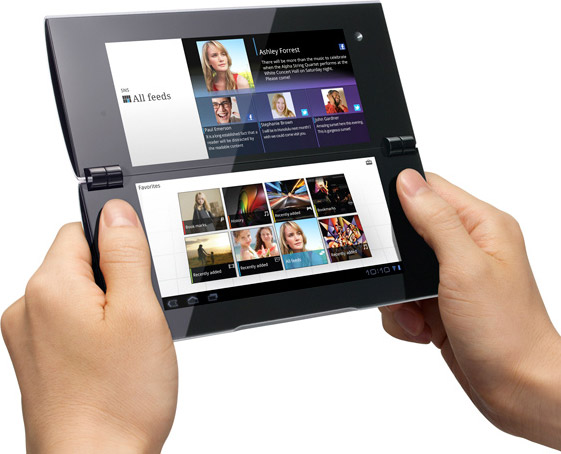 Looking at the S2 from the outside it is easy to see that the Sony S2 has inherited the curved form factor from the Sony PS3 game console. The hinges are even more visible now as they are sticking out from the back side of the tablet. Without the hinges, the S2 should glide smoothly down large pockets.

The last picture in this series is of a S2 having virtual game controller keys on the lowest of the two screens. 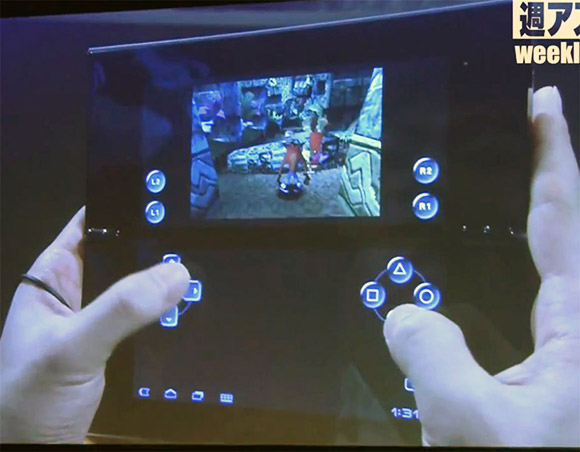 Do you think Sony will succeed in the tablet market? Are they too late or just in time now that the Android operating system has become mature?

winnerzero11 years, 3 months ago
i for one can't wait for these to be released and will most likely getting the S1...i don't think they are late, think its just in time really cos the honeycomb system now has time to mature and really excel...think these two tablets will be great additions for android...really looking forward to it...

Looking at the S2 gameplay shot, if the price is right - i think the Nintendo 3DS (& successor) will be in trouble. Smartphones(&iPod touches) are already eating into the DS/DSi market share. The 3DS may be sandwiched between mobile phones & the S2 - who needs a dedicated portable gaming console when you can have apps, 3G/Wifi, telephony & gaming all in one unit? I think it's brilliant to have virtual PSP controls btw.
I don't think it's too late for Sony in the tablet market, this mobile device segment is just in the early stages unlike the smartphone category.

goldenface11 years, 3 months ago
Thats what I was thinking. The screen real estate could be better.

Bonovox11 years, 3 months ago
Not a fan of the clamshell one

fastfast11 years, 3 months ago
actually this is surprisingly very nice, i thought it would liik like a wad of paper like ither stuff currently out there

adsada11 years, 3 months ago
on the s1 the way you'd hold it, means that the larger side will be at the top, surely making it top heavy which would be uncomfortable to hold?

korbindallis11 years, 3 months ago
@adsada
those are initial design images of-course Sony is going to make the balance just right so they will take that into account and get it right
and the Japanese are way better when it comes to form and function that's why I luv Sony

razec11 years, 3 months ago
the picture of the S2 showing the PSP virtual controllers spell the death for nintendo DS's future, the only way DS could compete would be in price. performance wise we all know how weak the DS line are in terms of game graphics. and i never had doubts that the Sony tablets would look really good
[ This Message was edited by: razec on 2011-04-30 09:14 ]

Supa_Fly11 years, 3 months ago
"a high tec infrared remote" christ! I thought with SE's experience with Bluetooth Sony would use that.
So a strong bezel with no buttons ... see a trend happening here in Tablets ~ RIM was first.

razec11 years, 3 months ago
I heard S2 would be more expensive than S1, too bad S2 is far more head turning!

masseur11 years, 2 months ago
and now an official Sony video of the pair.
Not sure what to make of this!

tranced11 years, 1 month ago
A new video is out:
http://www.youtube.com/watch?v=fcO95XPIHpg

On 2011-04-30 07:16:45, korbindallis wrote:
those are initial design images of-course Sony is going to make the balance just right so they will take that into account and get it right

Wow, I wish I still had that kind of faith in Sony Ericsson....

laffen11 years, 1 month ago
@mr_lou
This is Sony we are talking about, not Sony Ericsson

Bonovox11 years, 1 month ago
I love that video its very slick but lets hope the product is as slick too

awebuser11 years, 1 month ago
Thers is plenty of room in the market for Sony to release a tablet, I think they will be popular as the Sony Vaio Laptop is. I don't think the S2 could be classed as a tablet and it will definately apeal to those who don't want to carry something as bulky as a traditional tablet around.