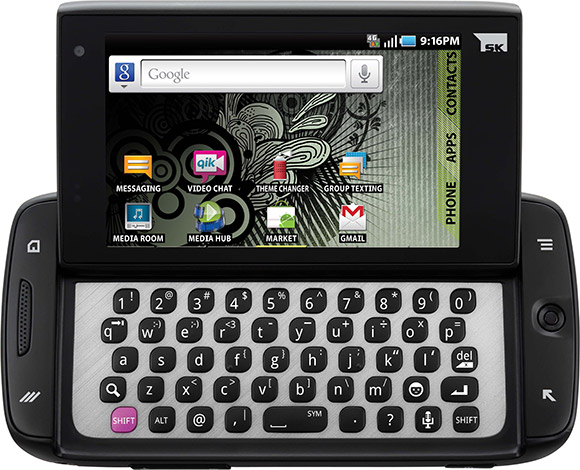 The previous generation of Sidekick phones has been manufactured by Flextronics, Sharp and Motorola. This time, it's Samsung that is going to do the hardware and finalise the device by putting on a T-Mobile sticker on. The older Sidekick and Sidekick LX 2009 was abandoned by T-Mobile US last summer. T-Mobile earlier announced that they would come up with a successor with HSPDA+ runnding on Android OS.

Sidekick has always been a QWERTY model with a recognizable form factor. The new Sidekick 4G is no exception. The display size has always been relatively small on the previous Sidekicks, but this time, its got a more normal 3.5 inch display for a phone of this size. The Android navigation keys are located on both sides of the QWERTY keyboard when the phone is opened which is a little unusual. One of these are a jumb key which enables users to quickly switch between active applications. By looking at the QWERTY keys, you will notice the target for this phone The young texters. It has hardware keys with shortcuts to popular smilies like :-) ;-) and <3. We havent seen this on a QWERTY slider before.

The specifications does not seem finalized, because the T-Mobile press release does not reveil much technical data about the phone. Well, we know it is a HSPDA+ (a.k.a. 4G). It has a 1 GHz Cortex A8 Hummingbird processor made by Samsung. It does not have the latest version of Android, but are running on Android 2.2 Froyo. An update will most likely be available soon after the launch. The Sidekick 4G has a VGA front facing camera and T-Mobile Video Chat powered by Quik pre-installed. Further specs are: Bluetooth, Wi-Fi, USB connection, 3.2 megapixel main camera and 3.5 mm audio out. Networks supported are: GSM 850/900/1800/1900 and HSDPA 1700/2100.

A new service by T-Mobile called DriveSmart is installed on the Sidekick 4G. When initiated, the DriveSmart service will send a customizable note to callers and senders letting them know that the recipient is driving and will respond as soon as possible.