The Sony Xperia S is a model we have seen leaked photos of many times before. While the latest leak photos was wearing the Sony Ericsson name, this final product image from CES has the Sony logo on top.

Sony Xperia S seems to be a smaller version of the Sony Xperia Ion without the LTE high speed connectivity. And for those not tied up with AT&T in the US, Sony offers the same content package in a smaller package. Where the Xperia Ion has a huge 4.6 inch display, the Xperia S has a smaller 4.3 inch display. But with the same 720x1280 HD resolution. A 1.5 GHz dual core processor should be enough for everyone for some time to come.

Sony has increased the camera megapixels count from 8 to 12. Very few smartphones can offer such a high number of megapixel count. Out my head, I can only think of Samsung Pixon 12, Sony Ericsson Satio and of course the legendary Nokia N8. All these produced excellent image quality, and we can just hope the 12 megapixels sensor in the Sony Xperia S will do the same. 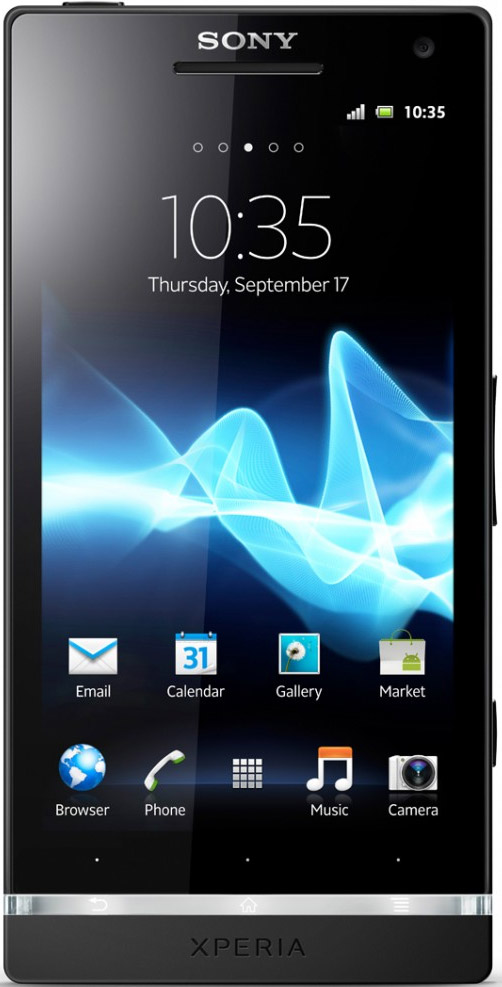 NightBlade8 years, 8 months ago
If the Ion doesn't come on this side of the pond, I'm soo getting this. Gorgeous!

xell8 years, 8 months ago
Just got informed about the price by SE Germany... 499  rrp guys, that's ONEHUNDRED EURO LESS than they initially asked for the Arc and will boil down to a launch price of about 420-450 .

Great price for an awesome phone!

Great price for an awesome phone!

That's great!! Hope they maintain a similar pricing in the other regions too

Supa_Fly8 years, 8 months ago
Quality design (Strong & Elegant), quality specifications, no filth - just how you use the device!
SonyEricsson, ahem, Sony is back!
Suddenly my iPhone 4S 32GB is feeling its age, just a tad. If ICS sweetens how to use Android close to iPhone I fear I may not be interested in iPhone 5 late this year. Only the purchases will hold me to iOS.

Supa_Fly8 years, 8 months ago
I'm very curious about the speeds of the HSPA+ ... could it possibly be Dual-Band HSPA+ (something that Telus Mobility here in Canada officially operates/supports)?!
I think the marketing director of the Xperia S is the first Android smartphone designer/engineer/director that FINALLY gets it ... "Sony's HD Technology throughout the phone. The technology is only the starting point, the reason its there, is to enable you & I to do amazing things with this smartphone!"
^ THIS is the key beyond all the crazy specs, beyond all the glitter ... because if it cannot deliver on the promise of both then what are you buying it for?! This is something Apple fully understands in ALL of its products since the very beginning. I see this being marketed heavily and going places in a BIG way!
[ This Message was edited by: Prom1 on 2012-01-10 04:37 ]

moogoo8 years, 8 months ago
really looking forward to seeing the price for this in north america... and whether it'll be for sale in america or if i'll have to import it from canada.
would also love to know if there is only a single version or if there will be Si and Sa variants... i hope it's just ONE version cause i'd rather not wait until end of second quarter for this bad boy...

Platia18 years, 8 months ago
Does anyone know if this is definitely quad-band HSDPA as the specs sheet suggests, and not 2 different models?

laffen8 years, 8 months ago
Please head over to the Sony Xperia S thread to continue discussion of the Xperia S

etaab8 years, 8 months ago
I always seem to say this following an announcement - i hate how it looks.
Good specs but i just dont like it one bit. Pure ugly imo. They should have kept a more curved Arc style. Square, too many joining lines between the casing, especially on the sides of the device. No Sony.. no !
Bring back Ericsson.

Bonovox8 years, 8 months ago
It is very,square!! I hope more than anything there will be no more poor build quality & creaky back covers. Oh no sorry no battery cover to remove