With the Sony Xperia S already unveiled at CES earlier this month a total of 12 smartphones will be released by Sony this year. The original currency in the list of upcoming Sony devices was given in Indian Rupee, and the conversion you see in the table below is done by Gsmarena. If we can trust the numbers in this list, average selling price will take a giant leap this year. Sony Ericsson reported in Q4 2011 that the ASP was Euro 166. For 2012, is will be Euro 306. An increase of 54%. That is far more than any other smartphone vendor so we think these prices are a little too high.

According to Gsmarenas source, all models for 2012 will be running Android. We have seen leaked photos of a Windows Phone prototype before, but that does not mean Sony will release a Windows Phone 7 smartphone this year. 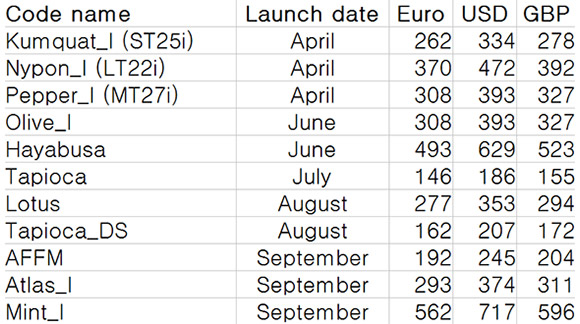 moogoo8 years, 9 months ago
looks like hayabusa or mint may be the flagship ?

tranced8 years, 9 months ago
But I'm a bit curious about the last letters. For example, Tapioca_DS. Does it mean Dual Screen?
At least, we know what the three first would be like.