We wanted to check the viewing experience of the new Sony Xperia P smartphone with the new WhiteMagic technology. The Xperia P is the first, and currently only device with this new Sony display technology inside. Therefore, we took the Xperia P outside under bright sun shining over Barcelona today. The results of this preview can be seen at the end of this article.

Sony WhiteMagic is a LCD technology that adds an extra white pixel (RGBW) to the usual RGB found in conventional displays. In theory, this should brighten the display up two times normal LCDs outside in "outdoor mode" and at the same be twice as power efficient when inside with "indoor mode".

We saw this demonstrated yesterday, but that was inside with a spotlight mimicking sunlight. We could not see much difference so we went back to the Sony booth today to take a closer look at this technology. As you can see from the image below, there is a new setting found in the Xperia P which give users the option to select "Power saver mode". This mode will activate WhiteMagic and save battery when the user is inside or in darker environments. It is also possible to manually adjust set the brightness where the lowest level of brightness corresponds to "indoor mode" and high-level brightness represent "outdoor mode" 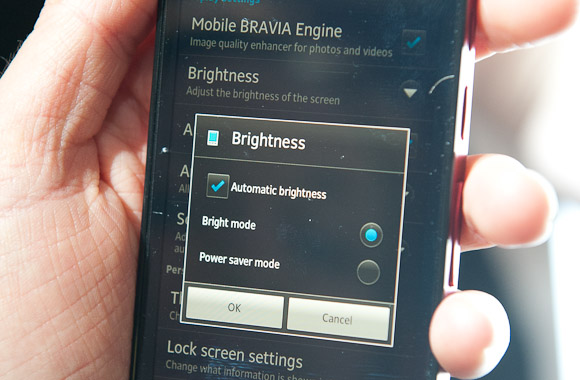 As the two images below demonstrates, covering the ambient light sensor with the finger will adjust display brightness to "inside mode". Take a look at the flower in the center of the image where the flower leaves has good contrast and the backlight is reduced. 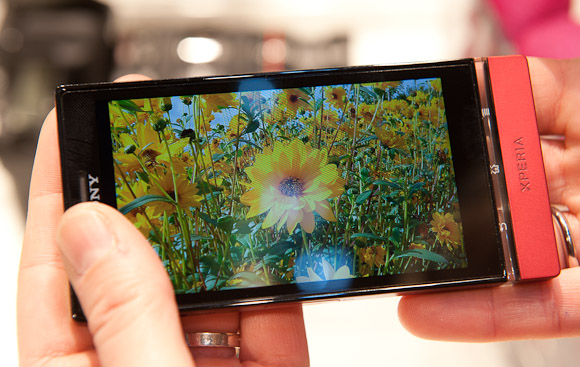 The next image where we have removed the finger from the ambient light sensor shows how the display now has increased the brightness and the flower has lost some of its details. The Xperia P is held under a spotlight which imitates "outside mode". 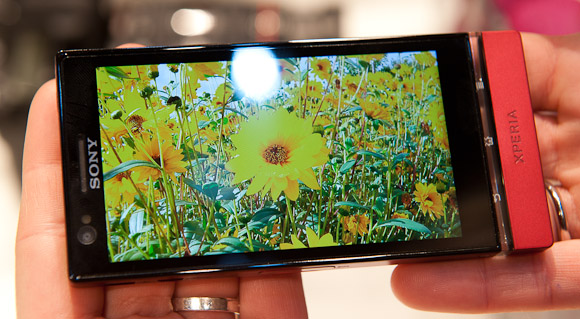 In normal LCD displays, the all three pixels (Red Green Blue) let the light through all three to generate white colour to the viewer. The WhiteMagic has the extra sub-pixel which represent true white. 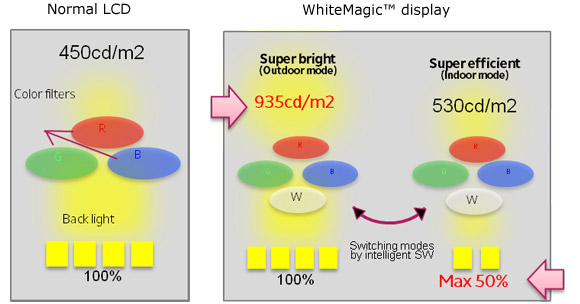 Xperia P has 935 nits / candela per square meter. That is one of the brightest displays on the market. Some of Nokia's new models has up to 1000 nits.

All the new LG smartphones announced during Mobile World Congress 2012

Bonovox10 years, 4 months ago
Yes looks good but why have they compared it to the dimmest display on the Neo?? You would obviously see a difference there anyway. They should have compared it to Arc not Neo.

On 2012-02-28 16:21:00, Bonovox wrote:
Yes looks good but why have they compared it to the dimmest display on the Neo?? You would obviously see a difference there anyway. They should have compared it to Arc not Neo.

I agree with that, this comparing is so useless.
I hope they will see that to

hihihans10 years, 4 months ago
not sure, but I think Laffen took this pic in a hurry.

laffen10 years, 4 months ago
The point here was that it was difficult to differentiate the Xperia P from the Xperia Neo which on paper has a much worse display. If I had compared the Xperia P with the Xperia Arc, the difference would be even less. At least on the photos. The Xperia P display is better, but WhiteMagic is not magic. There are times when you not are able to view the text on the screen because of the sunlight.

Bonovox10 years, 4 months ago
Oh I never realised you took the photo sorry

pt02010 years, 4 months ago
To see the "white pixel" in work don't you need something in white on the display?