Seven new devices were announced by LG during this years conference. Some will initially only be available in the Korean market but they will later appear in Europe, US and later the rest of the world. This year, LG focuses on a couple of fields where the company want to be among the leading handsets providers. These are:

LG Optimus 4X HD is a really powerful smartphone with the quad-core Tegra 3 processor from Nvidia. It has a 4.7 inch IPS touch display with a 720p HD resolution (720 x 1280 pixels). As the name indicates, the Nvidia Tegra 3 processor has four main cores clocked at 1.5 GHz. But a fifth, much slower core is running when there is no need for pure speed. One of the prototype units available for us to look at was showing the percentage each core was using. We played a couple of the installed games which is typically the app category that demands most out of the processor. None of the installed games gave the Optimus 4X HD any problems. Mostly 10-20 percentage used by two-three cores even when paying a wave runner game. The only time we noticed that the 4X HD made use of the full processor power was when a new application was started. But the high peak was only there for a fraction of a second.

LG Optimus Vu - A giant among smartphones. Where does the line between tablet or smartphone go? Probably at the size of the Vu and its 5-inch display. 5 inch is the largest we have seen on a smartphone, and 7 inch display is the smallest among tablets. Unlike the normal smartphones and tablets, the Optimus Vu has a display with a 4:3 aspect ration. The Optimus Vu has an extractable antenna for T-DMB broadcasting and a large stylus is among the included accessories. Optiums Vu has a dedicated hardware key which activates a special program where the stylus can be used. It is a simple photo editing app which let the user take notes, and select part of the screen dump to be shared or saved.

LG Optimus 3D Max - this years 3D model has a reduced size and it is now 9.6 mm thick down from 11.9 mm. The Optimus 3D Max has a glass-less 3D display and two 5 megapixel cameras. Optimus 3D Max has also got a faster 1.2 GHz processor and HSPA+ network support. Android 2.3 is installed but version 4.0 Ice Cream Sandwich will be available in Q2. Optimus 3D Max has got NFC capabilities with can be used to change phone profile settings when used with the new LG Tag+ NFC tags. 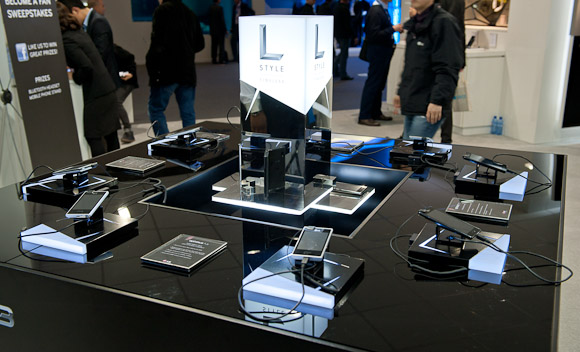 The last three models from LG are the Optimus L3, Optimus L5 and the Optimus L7. The three models are the first in the new L-series of design models. Optimus L3 is the smallest of the three and the price will be very competitive. It must be, because the specifications are very basic: 3.2 inch display, 3 megapixel camera, 800 MHz processor. L5 is a step up the ladder with a 4 inch display and the L7 has 4.3 inch display. We took a quick look at the three, and can confirm that the L3 display technology is from around 2010. It is not impressive now in 2012. But that is what you can expect to get for 150 Euro. All the L models will be available in white or black. L3 starts shipping in March followed by L5 in April, and L7 in May.

*Jojo*10 years, 7 months ago
Not bad. Looks like LG is making a comeback

tranced10 years, 7 months ago
Indeed they are. They gotta let them all worlwide. The dual core thingy will help them a lot. Plus their batteries are a big plus.

*Jojo*10 years, 7 months ago
@Tranced - Yup, and they pioneered the fone with a 3D design on it