It has not been a good last quarter for the Japanese-Swedish 50-50 joint venture. Today Sony Ericsson reported a loss in the fourth quarter 2011 of 207 million Euro. Except for a 65% increase of Xperia handsets year-on-year, the last quarter did not have much positive to show.

Only 9 million Sony Ericsson handsets was shipped during the quarter compared to 9.5 million in Q3. This is the same level as Motorola which sold 10.4 million units in Q4. Q4 which ends 31 December is usually a good one for because of the Christmas holiday shopping. Some of the loss can be blamed on restructuring charges which the company spent 93 Euro on. The restructuring program started in December, after the Sony buyout was know. The decision to start on a new restructuring program again could have been caused by the Sony buyout. The program will be completed by the end of 2012. 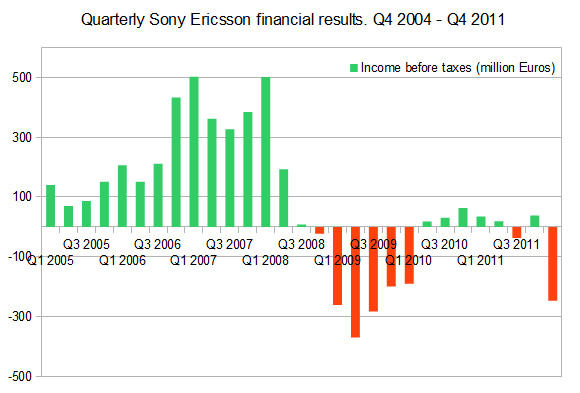 HellOnEarth9 years, 10 months ago
HANG IN THERE SONY, YOU GOT MY SUPPORT!!!

cu0151709 years, 10 months ago
They are going to have a really hard time against HTC and Samsung using an identical platform... and you see, Google doesn't give a fck who sells their adds, as long as they are activating more phones, it doesn't matter who makes the hardware. Good luck Sony