The K810/K818 Cyber-shot phone is a sleek, high-performance device boasting a 3.2 megapixel camera including auto focus and Xenon flash. Innovative applications such as Photo fix help to further improve the quality of your pictures, even after you have taken them. Illuminated Camera Icons to the side of the main keypad, which light up when in camera mode, allow the user to access camera menu options at the touch of a button.

As a compliment to this, the K550 Cyber-shot phone delivers the benefits of the Cyber-shot phone in a compact (14mm thin) form factor that places ease-of-use at its heart. Equipped with a 2.0 megapixel camera with auto focus plus LED photo light and active lens cover, the K550 helps ensure that you're always ready to shoot and share the best possible images. Add to this Bluetooth technology and Picture blogging and you have a camera phone that takes the complexity out of sharing quality images with friends and family.

As a distinct variant of the K550, the K550im is the first Cyber-shot phone to support i-mode, the operator service that gives direct access to a huge range of multimedia content and email.

"Worldwide, consumers are realising that the best digital camera is the one you have with you," says Steve Walker, Head of Product Marketing at Sony Ericsson. "The K800 established this and positioned the Cyber-shot phone as a credible fusion of phone and camera. Now the K810 and K550 move the market forward by introducing new applications that equate to real improvements in the customer experience, as well as introducing these phones to a whole new audience."

The K810 will appeal to those using their mobile phone on a regular basis to capture quality shots while on the move. Its slender good looks belie its high specification; it's not only a UMTS device for high-speed Picture blogging, but also one of the most advanced camera phones available. When in camera mode, the Xenon flash with red eye reduction will help to achieve great picture results in low-light conditions. Equally, the new illuminated Camera Icons will allow the user to select advanced camera settings (such as picture size & self timer) by simply clicking on one of the hardkeys; so no need to navigate into the full camera menu and risk missing that special shot.

No longer do poor light conditions and lack of contrast mean that the user has to delete that special picture. If a photo needs some improvement after it has been taken, then the new Photo fix solution can optimise brightness & picture contrast at the touch of a button. Meanwhile, if a user is shooting a moving object (perhaps at a sporting event), then the BestPic feature will let them take nine photos in quick succession and simply choose the best one. No point in missing the action.

Sharing your pictures is easily done with the K810 Cyber-shot phone thanks to a host of connectivity options: Picture Blogging allows you to upload your shots to your own blog site, whilst Bluetooth technology and USB 2.0 make it straightforward to share photos with friends or connect to your PC.

The K810 Cyber-shot phone is a UMTS 2100 (GSM 900/1800/1900) device available within Q2 2007. In addition, the K818 is a GSM variant intended specifically for China where 3G services are not established. Both will be available in two stylish colours: Noble Blue and Golden Ivory.

Even if you are new to camera phone photography or the Cyber-shot phone menu, the new K550 is designed to be an intuitive integration of highly-specified digital camera with a mobile phone. Simply by sliding open the lens cover, the camera is activated and the Cyber-shot menu appears in the phone's screen, which at 1.9" serves as a clear viewfinder.

And, once an image has been captured, sharing it can be done in a number of ways, each one a simple process; Picture blogging again makes it simple to send images to a blog site; support for Memory Stick Micro (M2) allows the user to transfer images easily between compatible devices and Bluetooth 2.0 provides for simple sharing with other phones and Bluetooth-equipped devices. If a user wishes to print out their latest holiday pictures, PictBridge makes it possible to print directly via USB (provided in-box) from the K550 to a compatible printer; cutting out the computer and the complexity.

As the first Cyber-shot phone to support i-mode, the K550im (distinct from the standard K550) gives the user access to a world of Internet content and email at the touch of a button. Following on from the popular K610im model, the K550im delivers a rich experience for handling imail, browsing the Internet and viewing content; all with the superior imaging capabilities synonymous with Cyber-shot phones.

Available in Jet Black or Pearl White, the K550 Cyber-shot phone is guaranteed to stand out from the crowd. A Quad-Band EDGE device launching in selected markets from Q1 2007.

Add more to your memories

Announcing at the same time as these latest Cyber-shot phones are two new optional accessories, designed to let the user manage their calls and their photos with ease. The Desk Stand CDS-65 allows the user to speedily transfer photographs between phone and PC via USB, or simply to synchronise data between the two while charging the phone. Attach a portable handsfree and the user can enjoy voice conversations while transferring images and music. Ideal for a home or office environment and available from Q2 2007.

For those who are regularly using their Cyber-shot phone (or compatible Bluetooth phone, Sony Ericsson or otherwise) on the move, the Bluetooth Car Speakerphone HCB-120 attaches effortlessly to a car's sun visor and provides for safer handsfree calling. With a digital display to show who is calling, and leading talk/stand-by times (up to 24 and 450 hours respectively), this speakerphone is a perfect compliment for the Bluetooth functionality in K550 & K810, and is compact enough for regular use in the car, office or home. A built-in tilt sensor ensures that the display reads the right way up. 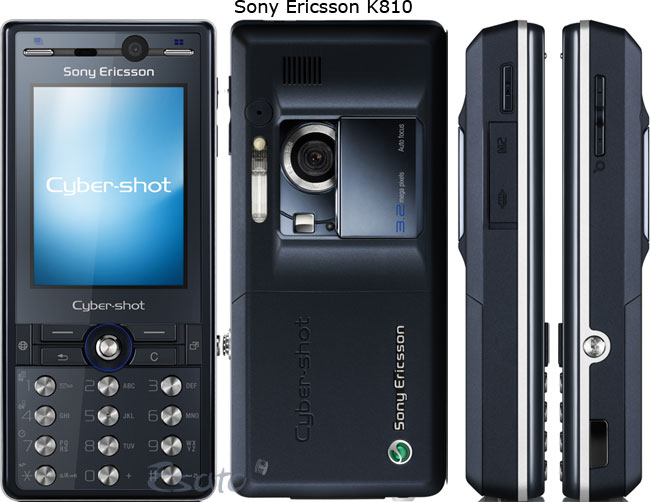 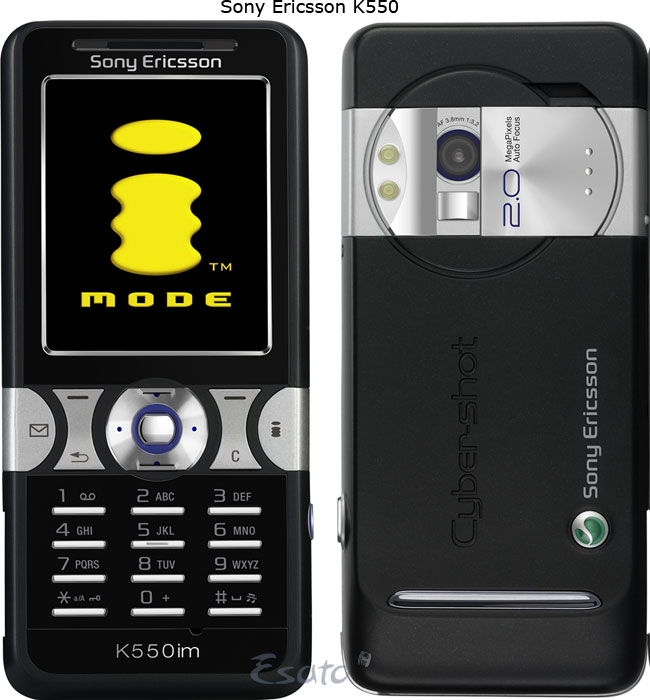 Comments
On 19 Feb 15:59 Diana wrote
Is the video recording in the same resolution (176*144), because it's really sad and bad ........please answer soooooon if anyones know! love you all SONY FANS
Diana!
On 14 Feb 19:51 Shyam wrote
k810....
it has a bluetooth stereo capability which enables listening to music on BT handsfree. Other than this, the new features like image/video stabilizer, taking 9 shots at the touch of a button to select the best one later (BestPic), red-eye reduction, xenon flash are mouth-watering features, which even enables one to take night-pictures. Also looks like this phone is designed for some multi-tasking like playing a game while on conversation, sending msg while browsing etc.,

Now the -ve one...with all these nice things, wont the battery life go down drastically..that to while using BT?? :( adding to this, this phone supports only till 1GB :( which may not be enough considering the loads of features.

i should say WooooooWWW for the features.
can anyone tell the indicative price of this phone?
On 14 Feb 13:38 Bybird wrote
I think its beautiful
On 13 Feb 21:20 Shyam wrote
k810....
it has a bluetooth stereo capability which enables listening to music on BT handsfree. Other than this, the new features like image/video stabilizer, taking 9 shots at the touch of a button to select the best one later (BestPic), red-eye reduction, xenon flash are mouth-watering features, which even enables one to take night-pictures. Also looks like this phone is designed for some multi-tasking like playing a game while on conversation, sending msg while browsing etc.,

Now the -ve one...with all these nice things, wont the battery life go down drastically..that to while using BT?? :( adding to this, this phone supports only till 1GB :( which may not be enough considering the loads of features.

loooooooool please SE dont be stupid like NOKIA
On 8 Feb 02:53 kahmeelo wrote
I think the key on the k810 are impressive. the k550 keys are too small. Its my next phone
On 7 Feb 20:30 govigov wrote
oh yeah , the keypad is definitely hideous on the k810i .

Just if there's such walkman phone having these features...
On 7 Feb 10:34 seman wrote
just like sony released the ps1 then the ps1slimline.and ps2 than the ps2slimline...ps3....?
On 7 Feb 08:26 troy wrote
K810 a little bit stranger with the keypad.is it comfort with that design?i don't think so.but it's nice,well i just don't like the pads.that's all for now
On 7 Feb 06:49 Nick wrote
Well looks like another great year for SE with the latest models.

*_ I want a 5 MP with optical Carl Zeiss x3 zoom
*_ CMOS image sensor, the S5K2E1FX, with 5 Megapixel (2,608 x 1,952 pixels) QSXGA resolution
*_ GPS
*_ can read .pdf files
*_ possibility to move/transfere maps, a really OS
All these are tehnically possibly but, SE like others mobile makers don't want to release them yet.
I'll go for that phone who will provide all these.
On 7 Feb 06:40 readfurther wrote
you guys are idiots! phone has same features, yes. but is more compact and has a much better battery life.

good improvement!
On 7 Feb 04:40 safari wrote
the keypads are so hideous!
On 7 Feb 03:18 deepu wrote
K810 have elevator-like buttons... yuck.
On 7 Feb 03:07 hanugro wrote
Agree 3.2mp is more than enough. I'd rather have optical zoom or thinner phone and hsdpa+qvga video. More mp only usefull in ideal condition (outdoor sunshine)
On 7 Feb 02:58 andre wrote
i dont like that k810 design......the i like the smooth curve egdes like that of the k800i...no difference on the features ...id still recommend k800i compared to k810i........the k550 is butt ugly
On 7 Feb 02:13 djsaad1 wrote
there was no real difference between the w800 and w810 either. This isn't the "next" phone, this is just a phone to bring up sales.
On 7 Feb 00:47 Maccer wrote
I don't understand why some people (Senna and xrat3d) want even more megapixels in their phone camera. What's the use of more megapixels if they are not "good" megapixels? The difference between a 2MP and 3MP sensor is almost un-noticable, simply because the rest of the camera is so bad that it can't handle the extra MP. The images take up more space but don't gain much in quality. In fact, the more megapixels you try to cram to a small sensor, the noisier the images get!

still QCIF video LAWL!!
On 6 Feb 20:09 TheIT wrote
I wouldnt be surprised if they were photoshopped, but they are definitely official ^_^ Great phones SE, I just wish you would stop bringing out new phones with old technology :(
On 6 Feb 19:57 kulorex wrote
Yes! Yes! Yes!