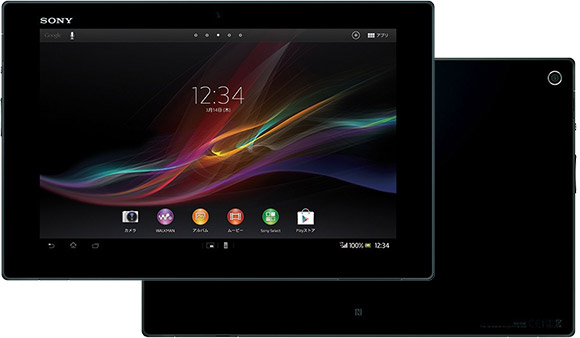 Sony Mobile today announced a the Xperia Tablet Z tablet for the Japanese market. Sony came late to the tablet market with Tablet S and Tablet P , but it seems like they have done the job properly with this new 10.1 model. Like all Sony's recent smartphones, the tablet will be branded as a Xperia device.

The 10.1-inch Android 4.1 Jelly Bean model is powered by a 1.5 quad-core processor. It's got a 8.1 megapixel BSI camera Exmor R sensor. It's also got Sony's S-Force 3D surround sound, NFC and LTE. Screen resolution is impressive 1920 x 1200 and the weight is only 495 gram. Like many of Sony's latest Xperia releases, the Xperia Tablet Z is both waterproof and dustproof.

Xperia Tablet Z will be available in white and black

Without Doubt A Great Release !
A Great Competitor From The Height Apple IPad 4 !
P.S: Congratulations SONY... What Will Bear Availability In Europe, Usa And South America (Mainly Brazil) !!!

Tsepz_GP8 years, 3 months ago
Very pretty as usual with Sony devices, but I hope it will perform and get much better FW support than the Xperia Tablet S, Tablet S and Tablet P, the latter seems to have been completely forgotten, and the other two seems to still be on 4.0.4 with no word of 4.1.2.
I've been put off Android tablets due to lack of content, as well as lack of high quality and well optimized apps/games/eBooks/Magazines etc... We seem to be treated as an after thought by the developers when it comes to tablets.
I hope Sony do what Amazon did and create their own store with stuff made for their tablets, as it would be great to have apps take full advantage of that incredible display.

jcwhite_uk8 years, 3 months ago
A very nice tablet but I suspect it will be very expensive.

goldenface8 years, 3 months ago
I wouldn't be surprised if this was priced higher than most. It's a premium product, good specs and very slim, one of the slimmest tablets around.

Ricky D8 years, 2 months ago
There is a fair amount of buzz and chatter regarding international release. In my opinion, enough to have reasonable hope on a fairly quick affair. I do hope we see 32GB worldwide though. Even with microSD, 32GB is better and more flexible in what you do with the thing.

Bonovox8 years, 2 months ago
I think it is very good what Sony is doing with waterproofing expensive devices

moogoo8 years, 2 months ago
if only this bad boy pumped out a resolution comparable to apple's retina or even the Nexus 10.. i think it would do better. being thinnest and waterproof isn't enough to make it a winner, i think.
i think people obsess more about resolution and pixel density when it comes to full size tablets.. but that's my opinion. would have been nice if they had put glass on the back of this too to make it ultra premium feel and match it perfectly with the Z phone, but i guess they were going for lighter weight.
i like it, but not enough to make me a tablet user and if sony can't do it. no one will.

Bonovox8 years, 2 months ago
What's the battery size as it is thin??

Ricky D8 years, 2 months ago
@moogoo
The pixel density is better than the Note 10.1 and Galaxy Tab 2 10.1, which I believe are two of the more popular android 10 inchers.
Most 10" tabs except the Nexus 10 and iPad have 1280x800. The Nexus is double that, the iPad is not far behind.
The Tablet Z is exactly in the middle at 1920x1200.
I don't think the resolution on this is not bad in any way. It's not truly market leading, but is more than adequate and the design makes up for it.
Waiting for the official word of global release on this is what's really putting me in a tight spot. I was all-in for getting a Nexus 10, just waiting for stock at my dealer, but now I want to wait to for Tablet Z and having to wait might put me out at work. The timing of the release is absolutely critical to me buying it or not.
----
If anyone knows anyone who can get one for me ahead of schedule I'm willing to pay, so long as it is a full production unit and not a development unit that won't be upgradable. PM me.

6000mAh battery on a 10" tablet with a 1200x1920 (224ppi) display??? Will that be enough juice for it? The iPad4 with 9.7inch 1536x2048 (264ppi) display (slightly higher resolution and PPI than Xperia Tablet Z) has a 11,560mAh battery, that's near DOUBLE the capacity. I understand that the iPad4 has a far more powerful CPU/GPU set so it may demand more power but it can't demand that much more juice than the S4Pro in Xperia Tablet Z, and the Tablet Z has a larger display to power, as well as a 2GB RAM chip and Android which requires more resources than iOS.
I put my iPad4 through some very hard use, with a ton of web browsing, reading newspapers, magazines, Im always on Facebook/Bloomberg/Twitter, I play music on and off from it when I gym, and the odd bit of YouTube, this is on a daily basis, with that usage it has around 40% battery by the time I go to bed at midnight, if I did the same with the Tablet Z I wonder if it would make it to midnight.
Didn't realize Sony had compromised so much on the battery, I'm quite shocked as us tablet users have become so spoilt by the long battery life these things give, my Galaxy Tab10.1 has a 7000mAh battery and that's with a 1280x800 res display. The Nexus10 has a 9000mAh battery and that's with a 2560x1600 (299ppi) display, I wonder if 6000mAh maybe too little for the Tablet Z.

moogoo8 years, 2 months ago
@RickyD..
i hear ya man. I didn't say it was bad resolution. As you said, it is right in the middle with only the nexus 10 and ipad retina having better resolution. I was just trying to say that if Sony really wants to make a splash in the tablet world after a fairly poor showing with the Tablet S, they should have pumped out a device that was maxed out on virtually every level and added the water resistance and sexy design on top of that.
that being said, if i were in the market for a tablet, the resolution would not bother me so much. what i would worry about much more is the battery capacity.
luckily, i don't have to think about such decisions since i'll never be a tablet user

Ricky D8 years, 2 months ago
I'm dying here waiting for this. More excited than any other gadget release since Aino (one of the best most underrated old SE handsets).
I'm becoming obsessed and twice refreshing pages for my local electronics market in the hope that a price and availability appears.
I'm also wondering if Sony will fill the space where the antenna is for global release. A stylus would be nice, but unlikely, extra battery would be nice, but unlikely. I guess they won't put anything there which is a shame really.

With the integrated keyboard and cover...

Bonovox8 years, 2 months ago
I know this has LTE but why is the HSDPA speeds so slow?? Only shows 14mbps

http://www.youtube.com/watch?v=dK4NTo6O0sk
What a beautiful Tablet!

goldenface8 years, 2 months ago
A must have, very desirable. Especially in white.

Ricky D8 years, 2 months ago
Does anyone know if this will have microUSB or some sort of proprietary connector?

goldenface8 years, 1 month ago
I think we may have to, it looks like this might not be hitting shelves until May, correct me if I'm wrong, please!

randomuser8 years, 1 month ago
I must admit I never liked tablets and still think tablets are the most useless gadgets ever.

BUT this Xperia Tablet Z is sooooooooo tempting

Ricky D8 years, 1 month ago
I heard mid-April for UK, but that was a while back, it could have been pushed to ensure launch sync with the rest of the world, I think they're trying to sync releases world-wide with recent devices. China didn't get Xperia Z even a day earlier than anywhere else and we often get handsets a week or so earlier at least.

goldenface8 years, 1 month ago
The press release just says Q2 but I'd expect it to be available in Europe before the US.
I'm hoping so anyway. Doesn't exactly fall in with their new strategy of 'a short time from announcement to availability' does it.
Feb - May is 3 - 4 months, like it was in the bad old days.

Indiandawg8 years, 1 month ago
Xperia Tablet Z launches in India on May 13, 2013