Memory Stick Format Series for Extended High Capacity
The demand for high-capacity memory cards capable of storing high-resolution pictures and videos is increasing as the image quality of high-definition digital still cameras, DSLR cameras, and camcorders continues to evolve. The new "Memory Stick Format for Extended High Capacity" format hopes to meet this demand by enabling the recording of up to 2TB of data, which is 60 times more storage capacity than the "Memory Stick PRO" format's 32-gigabyte (GB) capacity limit. 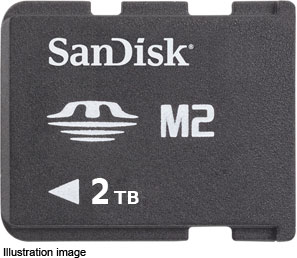 By this format expansion, "Memory Stick PRO Format for Extended High Capacity" shatters the terabyte mark for data storage, opening the door for wider applications. This new format is scheduled to continue to support the "MagicGate" copyright protection technology as well as the "Access Control Function".

Since the September 1998 market introduction of the "Memory Stick," cumulative shipments of media is estimated to surpass 500 million units in 2009. SanDisk and Sony will continue to work toward enhanced usability of the "Memory Stick" to respond to the market needs for larger and faster memory cards.

"SanDisk and Sony share a long collaborative history of developing products and technologies that enhance user experience and provide direct benefit to consumers," said Yoram Cedar, executive vice president, OEM and corporate engineering, SanDisk. "Both companies have enjoyed great successes with the Memory Stick PRO format in the past, and we are sure that the expansion of these formats to improve capacity and performance will be quite compelling. This technology provides a framework for us to develop products that will significantly impact mobile and consumer electronics markets."

SDXC increases removable memory up to 2 terrabyes of storage

Comments
On 7 Feb 20:41 zafnathpanea wrote
are yoo all nuts??? 2TB on a k810???? or in any phone existin 2day??? if it wud work on the phone and you fill it up with songs you wud hear the FIRST song in 3 years from now cause the phone wud get slower than an amiga commodore!!! you guys are just crazy! that will be great 4 HD movies when theres a phone with HDMI connection... :)
On 5 Feb 07:17 HenryDeacon wrote
Wait til the Old 23TB microSD cards go public. They've been around since the late 40's.
On 4 Feb 18:12 RobMarsh wrote
Bring on the HD Mobiles!

@RajeevIndia, if SE keeps loosing sales and marketshare they won't be so great for long but looking like a Motorola with a poor network/service division that Sony is screwing them on (less expenditure in this partnership, and news of not allowing Playstation brand for SE :( .

@ricky, you're close but you need to remember that as our consumption for media grows so does the way we manipulate it. ei if Music tracks evolve like Will.I.Am proposed a few mths ago, then mp3/aac's will grow signifacantly in size for a 5min track - around 5MB+ more than current because we'll be able to select different mixes like a 12" and even grab new content from the artist regarding the recording of that track (where, how-instruments used, production location, video, location in the world-gps data imbedded). Now add this to video and you see the BIG picture why 4/8GB is hardly comfortable today & much cheaper than what 1GB was just 1.5yrs ago!
On 22 Jan 11:24 RajeevIndia wrote
Sony is always gr8 and this is yet another great step from them, i appreciate it and those people saying it a fake plz replace ur mobile phone with SE
On 21 Jan 22:58 jason wrote
this damn thing is going to be expensive :(
On 21 Jan 20:22 NitroFan wrote
Oh great yet another Sony memory standard! why they cant just adopt SD is beyond me........ Oh of course Sony are the world leaders in changing storage medium it makes them rich well P off Sony I for one have had enough of being ripped off with your second rate product.
On 21 Jan 14:59 ImtiazAli wrote
When i was using memory card in GB,so it was not enough for my songs,pictures e.t.c.
And beside this i like this memoy too much.
LOVE U.
On 19 Jan 14:30 syukri wrote
wow!!
REALLY2 COOL!!
I WANT TO USE IT ON MY W760!!
WOW!!
Love This Damn Cool!
On 18 Jan 08:41 korbindallis wrote
Ya Now that's what I'm talking about :)
i can back up my whole life on this baby :p
On 17 Jan 18:26 ricky wrote
if we add different song to 2 TB, the playlist will be repeat to first song in 3 years!!!
On 17 Jan 01:21 laffen wrote
@ Malstom

Please provide the official link.
On 16 Jan 20:36 shashise wrote
sony have proved that even with success of micro sd card i still believe m2 was more path breaking and orignal san disk just followed sony i can,t wait to see m2 in all mobile phone in future
On 16 Jan 04:59 MusthaveIT wrote
Whens it out?
On 15 Jan 15:10 ricky wrote
wow...so i can have 400.000 songs in my mobile phone?amazing....hahah...
On 14 Jan 12:30 K550W610user wrote
I think it may cost the price of 2 Xperia phones.
anyhow good step towards high capacity storage...
60MB/S jus unbelievable..our PCs should be equipped 1st with latest h/w
On 13 Jan 15:33 abedlatif wrote
be i be able to download my brain onto it????
On 13 Jan 14:02 JEN wrote
what will you think the price for that high of memory capacity?
it sure will be cost a lot.

I though SE will later using micro SD as SE had agreed with other mobile phone manufacturer using a universe standard memory card, that is micro SD.
On 13 Jan 12:32 oi wrote
wow...can i use it for my phone,SE K810i? hope it can coz it really cool
On 13 Jan 08:46 Prom1 wrote
OOOOH AAAAAH. Does this mean the Sony M2 cards will have a new speed & clock bandwidth in the SAME format as M2 or will we have to shell OUT for yet another proprietary/standard format?! Nothing clearly states this in this otherwise informative press release. MicroSD X is there so this was only bound to happen.

Now if ONLY SE can boost the stagnant 52kbps BT transfer speeds from their phones to PC's on a phone that supports BTv2.1+EDR capable of 2Mbps xfer speeds.
On 13 Jan 06:27 wow wrote
WOW! just wow...