Introducing HTC Footprints
The new HTC Touch Cruise is the first mobile phone to offer HTC Footprints, an application experience that enables people to permanently chronicle their special moments by capturing a digital postcard on their phone. Once captured, Footprints provides the ability to take notes and an audio clip of that favourite restaurant or special place while identifying its specific geographical location. In addition to identifying each postcard with its specific GPS co-ordinates, Footprints also auto-names each postcard with its general location or area.

Flipping back through their photos, HTC Touch Cruise users will be able to retrace their steps to that exact location in just a few touches. Unlike other devices with geo-tagging functionality, HTC Footprints works effectively outdoors and indoors, offering a more accurate record of location for future reference and navigation. 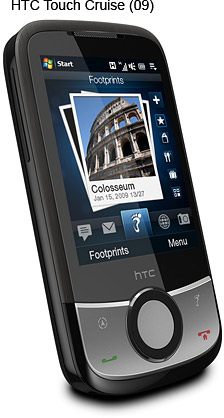 "Just as we have seen GPS technology transform how people navigate to new places, we are now seeing location-based applications like HTC Footprints changing how we interact and carry our memories," said Peter Chou, President and CEO, HTC Corporation.

The new HTC Touch Cruise will be available to customers across all major global markets in spring 2009.

Comments
On 23 Jan 18:41 Rob wrote
Difference between this and the touch diamond?

hate it when phone companies have no innovation of their products... different design same specs. Same with SE. every few months they will bring out a newer design with slightly better specs like camera but apart from that everything is the same as an older phone... you get bored after a while...

Samsung is the new way to go... OMNIA at last a decent phone to hit the market.
On 23 Jan 15:00 Dale wrote
nice design and specs