It is nice to see that the BlackBerry platform is alive and growing. Competition to Apple App Store, Android Market and Nokia Ovi Store is healthy as it increases innovation and lower the prices.

Revenue breakdown for the quarter was 82% for devices, 15% for services and 3% for software and other revenue.

Next year might be even better for RIM when the BlackBerry PlayBook will become available. This 1GHz dual-core cpu, 7 inch tablet will have to compete with the Samsung Galaxy Tab, the iPad and of course the unannounced Motorola tablet. Samsung and Motorla tablets are running on Android, the iPad on Apple OS4 and the PlayBook will be running a new BlackBerry Tablet OS. The PlayBook does not even have a 2g or 3G network connection. Initially it will only come with a Wi-Fi 802.11 a/b/g/n connetion, but RIM intends to offer 3G and 4G models in the future. The iPad sold very well but it remains to see if RIM is able to compete in this more and more crowdy market. 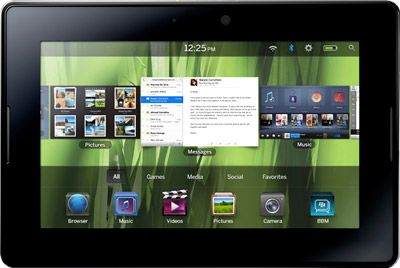 The end of Symbian.org - Home of the Symbian Foundation