Everyone is waiting for the big thing. The Xperia Play is out of the box but we are sure Sony Ericsson have more to show. We will see in a short while. Just as last year, the WiFi connection here is not working very well. Strange. It's only 800 people from the press trying to upload images at the same time to the 2 wireless routers available.

The Xperia Arc was acctually announced at CES a couple of weeks ago, so this is not a new phone model. I am sure you have seen it before. It is the thin one. But when we held in in the hand for the first time, it was not the thickness of the phone that felt different. It was the weight. It feels very light. That's not allways a good thing. Plastic comes to mind. Build quality often comes hand in hand with weight, and even if we were assured by the nice swedish woman that the plastic was of very good quality we must check this out in real life to be convinced. Whats so special about the Arc and what is differencing this phones from Android Average. Quick answer was Reality Dispaly, Exmor R sensor and Android 2.3 (at least for a month or so). There is something about the advertising of the Xperia Arc we feel the urge to get out of the way right now. The official press release are saying that the Arc are 8.7 at the thinnest part. And the product specification page are reporting 8.7 mm as well. That is not how the rest of the mobile phone manufactures are doing things. The dimentions should of course meassured at the thickest part of the phone.

Xperia Play. Quote from the stage during the presentation: This phone will be available to the US market first. Sony Ericsson realise that US has been a week point. US first, then the rest of the world. Just like Apple used to do things. I was was accidentally browsing the press section of the US version Sony Ericsson today, and it is obviously that very few Sony Ericsson models are finding its way over the ocean. The 6th latest news over there was from April 2008 and the breaking new was that X1 will come to the US. Surely Sony Ericsson has been a small player in the US and it is naturally that they want to change this.

20 partners will have finnished 50 games when the Xperia Play becomes available in the market later this spring. A couple of games are pre-installed on the device when it is unwrapped from the package. Which games are not decided yet, but they will show the variation of possible game genres.

The desktop stand shown in one of the Xperia Play images below are not included in the standard package. 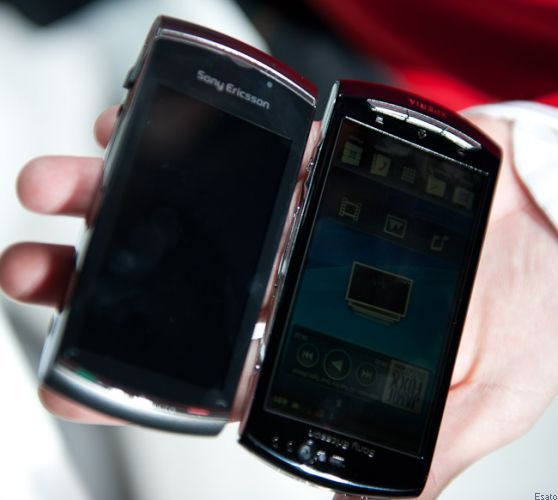 Sony Ericsson Neo. The first phone announced today. The highligths were 8 megapixel camera and a good video recorder. Maybe we have missed out something, but we are sure if this alone can sell an Android phone in 2011. We have had our hand-on with Xperia Play and Arc, but not the Neo. Something might turn up later. Neo reminds me of Vivaz. A phone with a very good hardware but with below average operating system (symbian). Full Xperia neo specs
Update: The neo is arc's little brother. They both have the same camera and dispaly features. Which means Exmor R CMOS sensor and Mobile BRAVIA Engine.

Some, including  myself thought the Xperia neo looked like a Vivaz. I brought a Vivaz to the show for comparizon, and these are the photos I captured.

Sony Ericsson Pro. Successor of Sony Ericsson Xperia Vivaz. It is a mid-range model for those going for a QWERTY model. Like the Xperia Neo and Xperia Arc, the Xperia Pro is running on Android 2.3 Gingerbread. This is also packed wieth some Sony technology such as Reality Display, Mobile BRAVIA Engine. In fact, the three models Pro, Neo and Arc seems to be made by the same team. The are sharing most alsmo all possible features. The obvious difference is the larger display on the Arc, and the QWERTY keyboard on the Pro.
Full Xperia Pro spesification list

Images of the Xperia Pro

Barcelona here we are

tranced11 years, 9 months ago
The Pro wasn't what we were expecting. Hope they come up with some things else.

OffLineR11 years, 9 months ago
If Arc will come out in two weeks time that will be a record for

mustafabay11 years, 9 months ago
Pretty sure Pro is not successor of X10mini pro. There's been a rumoured 3" phone for that position. More like vivaz pro successor just like neo is sort of vivaz successor.

laffen11 years, 9 months ago
@mustafabay
Sony Ericsson confirmed to me that the pro is the Vivaz successor. Same mid-price range as the Vivaz Pro too