LG Optimus Pad
The Optimus Pad are running on Android 3.0 Honeycomb which we explained briefly in an earlier article. It is a tablet with a 8.9 inch display, two camera lenses, 1280 x 768 pixel display with a 15:9 aspect ratio. The 1GHz NVIDI Tegra 2 dual-core CPU makes it possible to view Full HD 1080p videos. The screen on the device itself is not full HD, but using a HDMI cable you are able to see the HD contect on an external screen. LG has not done much to the generic version of Android. A few LG widgets will be included, but these were not installed on the device we tried. To record in 3D, LG has included a 3D Camera app. This is an addition to the genering Honeycomb app. Four modes are available for 3D recording. Mixed, Anaglyph which requires glasses to watch (as seen on the image below), single for normal capture, and side by side where the screen is split in two and the two lenses are recording to each part of the screen. We did not find any good reason to use the side-by-side mode but we will digg up more info regarding this later. The media recorded can't be viewed in 3D on the Optimus Pad itself, but connecting the Pad to a 3D HD via the HDMI out should give the wanted result. 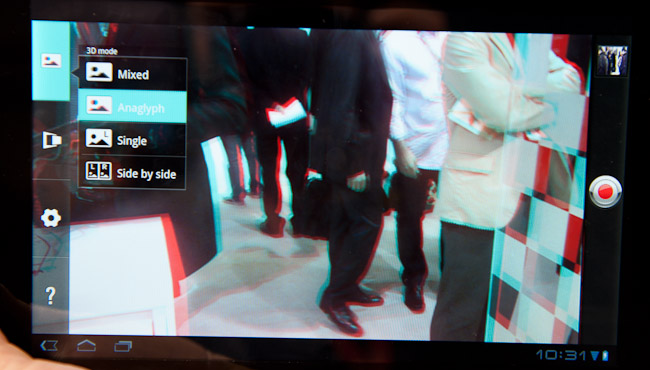 LG Optimus Pad is also called G-Slate in the US. The G-slate and Optimus Pad has the same hardware except a printed T-Mobile sticker on the back of the G-Slate.

LG Optimus 3D is the world first mobile phone capabel to both record and display 3D media on the device itself. The 3D recording is done using two lenses on the back of the phone

The Optimus 3D is powered by a 1GHz OMAP4 dual-core CPU and four times mode video decoders than competing designs, doubles the graphics performance of its nearest competitor. Recording in 3D using two lenses is no magic, being able to display media to the user without using glasses is. LG has solved this by using a stereoscopic LCD where an extra glass is placed on top of the usuall LCD display. The extra layer of glass split the images directionally into the viewe's eyes. The effect is only visible when the phone is held horizontally, and the effect will disappear if the angle of the display is wrong. 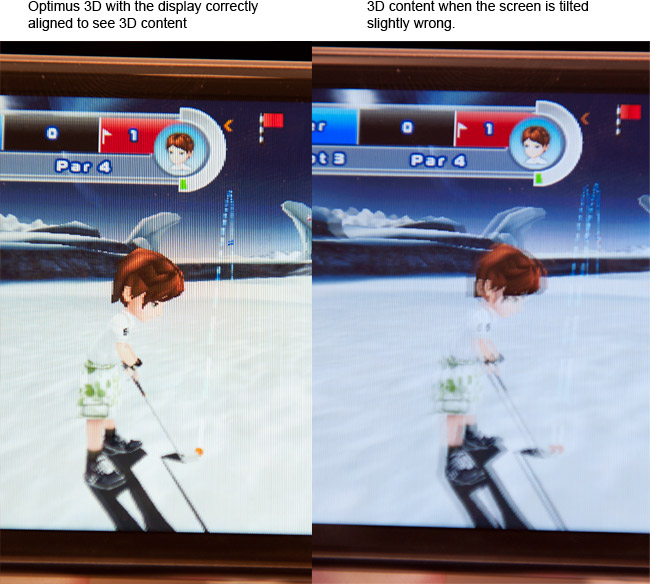 The optimal way of viewing 3D media on the phone is by holding the phone 30-40 cm from the user. It is also possible to simmulate 3D with regular images files using a SIM 3D application. A couple of 3D games are included where Golf 2 is one of them.

3D images captured are saved a JPS (jpeg stereo) where the image is vertically split in two and the two cameras has captured a left and right version of the image.

A dedicated 3D key is placed where you usually find the shutter button. Optimal distance for recording 3D is 0.5 to 3 meter. Recordings captured outside these limits will not experience much 3D look.