The Thunderbolt for Verizon is one of the worlds first LTE capable smartphones. HTC Thunderbolt has a 4.3 inch touchdisplay, running on Android 2.2 (Froyo) operating system and has a 1GHz Snapdragon processor. Thunderbolt is powered by Qualcomm LTE chipset solution providing seamlessly switch between 3G and LTE networks. More specifications are: 8 megapixel camera with autofocus and a 480 x 800 pixel display resolution.

HTC EVO Shift 4G was announced with Sprint last week. It has a full slide-out QWERTY keyboard, 5 megapixel camera, 720p HD video recording and a 3.6 inch display. The Android 2.2 devices has FM-radio, Bluetooth 2.1, Wi-Fi and GPS. To get promissed 4G speed, EVO Shift 4G is connected via Sprint's WiMAX network. WiMAX has peak download speeds of 10 Mbps and 1Mbps up. According to Sprint, average download speed is 3-6 Mbps.

All three smartphones are having HTC Sense user interface running on top of Android.

None of the phones will win any beauty contest and only a trained eye will spot the difference between the new HTC lineup. 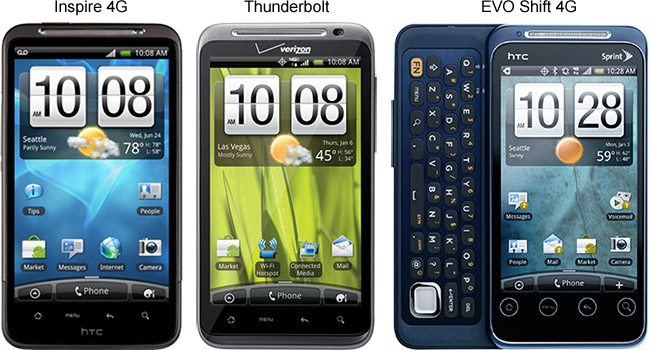 goldenface12 years ago
According to Spring the average download speed is 3-6 Mbps? Isn't that a bit low?

laffen12 years ago
It seems strange, but yes, WiMax is slower than 3G (EVDO Rev A) in terms of upload speed. 3G = 1.8 Mbps, WiMax = 1 Mbps. http://newsroom.sprint.com/news/htc-evo-shift-4g-fact-sheet.htm

tranced12 years ago
I thought the same at the time I read it. Will Wi-Max success?
I will bet for the Inspire 4G and EVO Shift 4G this time.