Sony Ericsson Xperia Play will be available in March this year, and is the first mobile phone which are PlayStation certified. We have been at the Sony Ericsson booth and have captured a video while doing a short demo of the phones gaming functionality.

The Xperia Play will have five games installed when shipped from the factory. These are Asphalt, Dungeon Defenders, Star Battalion, Bruce Lee and Fifa 2010. 50 more games will be available via Android Market at launch in March. We have been told that by the end of the year, 100 games will be avaliable in the Android Market. All these games are PlayStation certified. A RSS shortcut found on the Xperia Play desktop leads directly to those games on the Android Market which are PlayStatin certified. 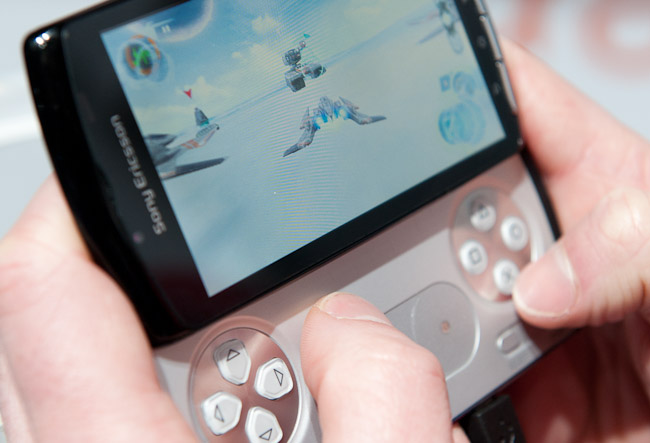 Use your smartphone as a heart rate monitor with ANT+

masseur11 years, 9 months ago
I'm not much of a game player but that is definitely cool!
I just know that my son will love that and coincidentally, his birthday is in... March!

goldenface11 years, 9 months ago
Brilliant! What a hot piece of hardware, brilliant graphics. It should do really well.

tranced11 years, 9 months ago
It looks simply amazing. It's very fluid and a good gaming device.
One question: what's the average size of game for this?

laffen11 years, 9 months ago
I don't know the average size for the games, but I was told it could be up to 1 GB in size. It depends on the game. This is what we have the microSD slot for.
The control buttons feels good. I'm usually ending my evenings here in Barcelona with a round of Rige Racer with a PSP, so I know how it should feel like. The touch-pads on the other hand, does not feel right. None I have spoken too is using these when playing any of the installed games. Might take some time to get used too, but they can't be compared to the PSP analog stick which is my perfered control stick.
[ This Message was edited by: laffen on 2011-02-16 21:49 ]

jplacson11 years, 9 months ago
I wonder if it can connect wirelessly to a PS3 and function as a regular controller as well. That would be cool!

razec11 years, 9 months ago
Finally this forum section has people who really knows technology and are not troll-minded.
It's quite irritating that several troll-loving and air headed people on some other tech sites complain about the phone not having dual core CPU and so on when the XPERIA PLAY itself is designed to run the new PS crossplatform framework based games designed to run on both Play and PSP NGP.
[ This Message was edited by: razec on 2011-02-19 00:46 ]

boy.in.PINK11 years, 9 months ago
Yes! As a teenager, the numbers doesn't mean anything. This baby is really cool even if I'm not a gamer at heart.