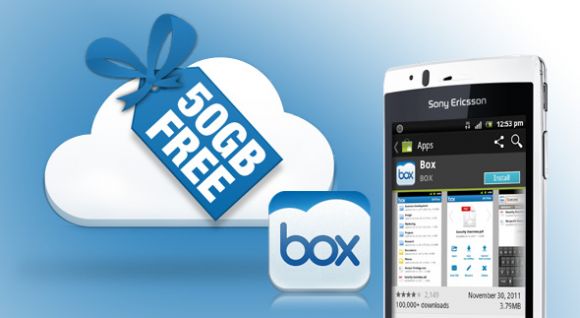 Sony Ericsson has now confirmed that they will offer 50 GB cloud storage if you sign up with box.net using a Xperia smartphone. To take advantage of this offer, you will need to sign up at box.net using the box.net Android app and a Xperia device. Existing box.net users can also take advantage of the offer by signing in using a Xperia device. The 50 GB storage is not time limited and those who sign up will have such amount for life.

As we wrote earlier, owners of LG handset has received a similar offer. LG owners can wait a little longer before making a decision as they have until March 31 to claim the offer.

The free box.net offer from Sony Ericsson lacks advanced features such as video preview, password protected sharing and full-text search which you will find in a paid subscription. Normal pricing for box.net storage is 5 GB for free, $9.99 for 25 GB and $19.99 for 50 GB.

Sky Hi8 years, 10 months ago
Aaaah! You were faster than me with that post!

Just got my 50GB for my Xperia Mini!

Ravager8 years, 10 months ago
Personally I don't have any use of this but I guess a lot of people out there have. Nice to offer it though!

masseur8 years, 10 months ago
agree... I'm yet to trust "the cloud" implicitly and prefer to keep control of my data and backups

still... its a selling point that will interest many I'm sure.

tranced8 years, 10 months ago
And I suppose that it will only work with 2011 Xperia phones? According the market, my X10 Mini Pro isn't compatible.

goldenface8 years, 10 months ago
I signed up earlier on today and uploaded some photographs for posterity (of a recent addition to the family).
It's nice to have the option and it's free so why not and 50GB is very generous.

tranced8 years, 10 months ago
I tried using the web version of the Market. Will try from the phone and I'll let you know.

tranced8 years, 10 months ago
As I supposed, the X10MP didn't work.

aLaN8 years, 10 months ago
I've registered using my X10i and my gmail account and I got the 50GB

OffLineR8 years, 10 months ago
I have opened the Box application today nad Hoooray.
I got my free 50GB.
It works şn Turkey which means it will probably work in every other country

Same here... I don't currently even own an Xperia product so I downloaded the box app on my friends mini to pro to register and now use the account with my N8 at m.box.com which Im sure you can do with any device... well... I have the account but I wouldn't say Ive really been "using" it....

I figured I'd just sign up for one while they were offering it just in case I decide I need it later if I move to android.

mediar8 years, 5 months ago
I have a question about Box.net's free 50GB for Xperia users. Three days ago I signed up with my Xperia Pro and got the additional 45GB for free as well, but a friend of mine owns a Samsung Android phone and he will probably get only 5GB account when he registers there. So I got an idea - maybe I could set up second account for him with my Xperia pro and give it to him. Is that possible or the offer is valid only for the first account?