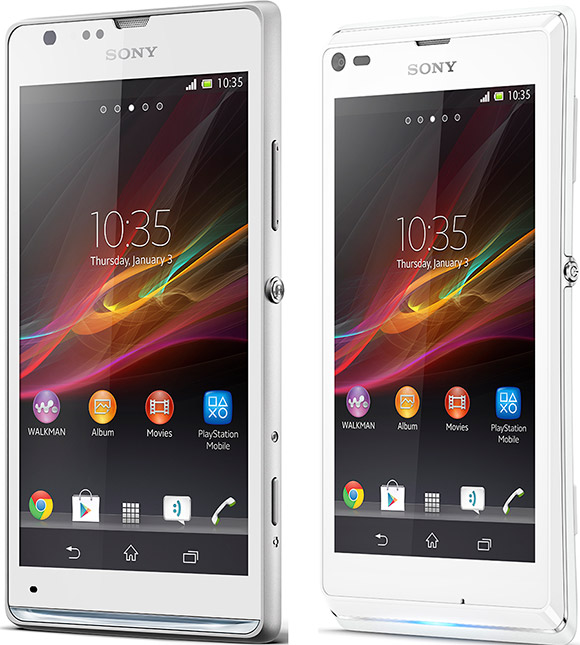 Xperia L is the most affordable of the two devices with a 4.3-inch TFT touch display and 480 x 854 pixels resolution. Sony highlights the camera as one of the main reason to why consumers will choose this smartphone over one from the competitor. Xperia L has the relatively new Exmor RS for mobile sensor which was first introduced with the Xperia Z flagship smartphone. The Exmor RS sensor enables video recording with High Dynamic Range (HDR). Sadly, the video camera has a maximum resolution of just 720p.

While the two new Xperia model have almost the same dimensions, the Xperia L has a smaller 4.3-inch display. Xperia L has a 8 megapixel camera and can record video with a maximum of 720p resolution. The front camera has a surprisingly low on resolution. It is a VGA camera which given the low resolution mostly will be usable for video calls. A 480 x 854 pixels resolution on a 4.3-inch screen result in a PPI of 228.

Google has released Android 4.2 Jelly Bean but Xperia L runs on Android 4.1 Jelly Bean. The OS is upgradable and Sony has now become of the best vendors to release OS upgrades.

We are impressed of the list of communication features in the Xperia L. It will be shipped in two versions. Both the Xperia L C2105 and Xperia L C2104 has quad-band GSM network support. The C2104 also has quad-band 3G support (850/900/1700/2100 MHz). C2105 will be sold in other markets and it support dual-band (900/2100 MHz). More connectivity features include: 3.5 mm audio jack, GPS, Bluetooth, Wi-Fi with Wi-Fi Direct and Wi-Fi Hotspot, micro USB, NFC, DLNA and Screen mirroring. It should not be any problem to use this device for sharing media content on another device.

Xperia SP is a step up in features from the Xperia L. Comparing specifications, this model is closer to the older flagship model Xperia T. It has a 4.6-inch display and a 720 x 1280 pixel resolution. While the 8 megapixel camera has a lower resolution than the thirteen in the Xperia T, the improvements with the Exmor RS sensor could result in better pictures than those from the older handset.

Xperia SP has a dual-core Qualcomm Snapdragon MSM 8960 Pro processor clocked at 1.7 GHz. The GPU is Adreno 320, which is the fastest GPU in the Qualcomm S4 chipset range. There is 1 GB RAM on board and the 8 GB internal storage can be expanded further by inserting a microSD card.

Sony broke the 2000 mAh battery barrier when they released the Xperia Z. The Xperia SP follows up and the 2300 mAh battery is one of the most powerful from the Japanese manufacture. Standby time is 697 hours and talk time is reported to be 10 hours and 44 minutes.

Away9 years, 2 months ago
Beautiful designs for low and mid-range handsets. Certain other companies should take note. Just not like HTC took note (by copying them directly).
I can see the L selling pretty well...And the SP is unmatched in its range, so should sell well too.

Bonovox9 years, 2 months ago
Cheap?? It's got a metal frame. As for saying why only 720p,do we really need 1080p on a small phone?? I could not notice the difference between the XT and XZ display the human eye cannot really tell. It looks alot nicer than GS4 design,more elegant

Tsepz_GP9 years, 2 months ago
As with all Sonys, gorgeous designs, I dig the Xperia SP's especially.

Wonder if we will ever see a Xperia Ray update or Xperia Play update, I'm especially wondering about the Ray as many people here loved that phone, thought we'd see a nice 3.7inch upgraded version a some point.
[ This Message was edited by: Tsepz_GP on 2013-03-18 19:30 ]

Away9 years, 2 months ago

I agree with your comment, except the response to Hardened. I believe he was joking - referring to TV resolutions.
On-topic.
The SP seems to be much better than the T...