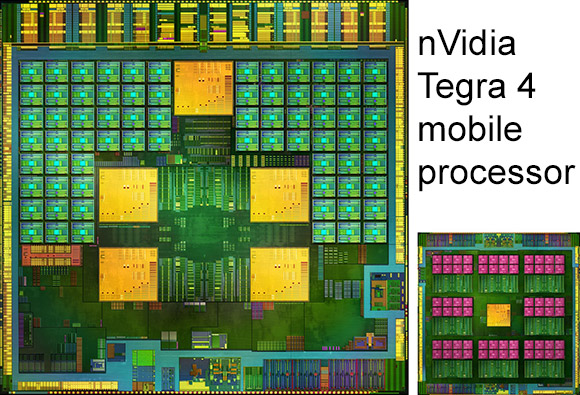 nVidia today announced the Tegra 4 which is the world's fastest mobile processor. A part from having a 5th core for low-power tasks and being 2-3.5 times faster than the competitors, the Tegra 4 has a couple of interesting features:

The 72 GPU cores provides the power to do real-time HDR video recording and "One Shot" HDR. Common HDR technology is a step-by-step procedure where several images are captures in a row and where the computation happens one-by-one. According to nVidia, the computation takes 2 seconds per frame. It is difficult to get good HDR shots because subjects in the picture need to be almost identical on each frame. nVidia's approach to this is to capture the images first, and then do the computation on all images afterwords. Even though nVidia call this "one shot" HDR, the two images used to create a HDR result are captured just after each other. In conventional camera architecture the image sensor (S) capture and send image data to the Image Signal Processor (I) before reaching the memory (M). In nVidia's solution, the sensor sends raw image data to the Tegra 4 where the Image Signal Processor works together with the GPU's and CPU to create the final image. This is up to 10 times faster according to nVidia. 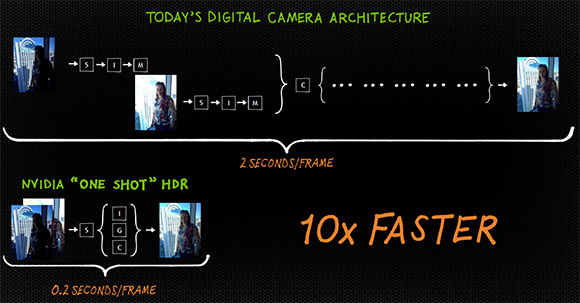 We found a little curiosity in todays nVidia show. The image below is from the official nVidia presentation held earlier today. Notice the top-left image used to show how HDR video looks like. We remember seeing this particular shot before where the original HDR video was captured with two Canon 5D mark II DLSR cameras. Remember the buzz when Nokia made a fake Lumia 920 demo video? 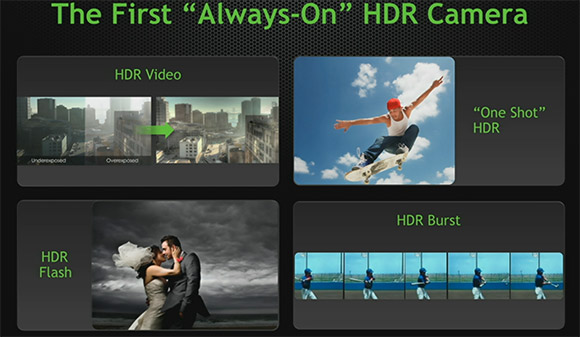 18 months ago, nVidia bought the company Icera which made soft modem chipsets for the mobile device market. nVidia has now implemented the Icera i500 soft modem into its products. The Tegra 4 can be companioned with the 4G LTE modem processor. The i500 Soft Modem chipset offers Software Defined Radio (SDR) and 8 modem processors. One of the advantages of having a programmable processor is of course that it is easy to do future upgrades.