The RAZR², which will debut around the world in July 2007, features a slimmer exterior than its RAZR predecessor, along with ground-breaking new features designed to empower consumers in every facet of communication. New products such as the MOTO Z8, MOTO Q 9 and ROKR Z6 were also on display and will begin shipping in Europe and Asia within the next month. The ROKR brand will be synonymous with Motorola’s music-optimized handsets and headsets as the company addresses the importance of music for today’s mobile consumer.

New Level of Style and Performance
For discerning mobile consumers who demand stylish design and powerful features, Motorola is delivering a range of innovative and smart handsets – starring the next generation RAZR².

The RAZR2 is sleeker, stronger and an even smarter consumer experience, featuring:
Innovative CrystalTalk™ technology for better call clarity1.

Seamless access to digital music, a real-time point-to-point video feature3 that allows another wireless customer to “See What I See” and up to 2GB of on-board memory for approximately 1,000 songs4.

In a Motorola first, the new family under the RAZR brand includes three editions to be available worldwide starting in July 2007, including RAZR2 V8, V9 and V9m in GSM, 3G HSDPA and EVDO CDMA respectively.

Powerful Multimedia Combinations
For mobile consumers who combine business and pleasure, productivity and entertainment, Motorola offers an uncompromised collection including the Z8, MOTO Q and the ROKR. These devices provide powerful multimedia and messaging experiences – email, music, video and gaming and comprise a segment growing at 30-35 percent over the next two years. Motorola’s 2007 collection features an unmatched selection of products designed to maximize the power of each experience.

The Entertainer: Cultural trends point to a mobile lifestyle for the “always on” generation that heavily consumes media and thrives on self-expression and social networking. For this audience, Motorola has delivered the best combined mobile movie, TV, music, Internet and gaming device for today’s entertainment fans.

Giving consumers a new way to get their mobile TV and video, the Z8 is a media monster that will launch across Europe and Asia in June. The world’s first-ever “kick-slider” device, the Z8 was meticulously engineered for comfort – a perfect “fit to face.” The unique HSDPA-enabled handset offers:
Download songs at 3.6Mbps, the fastest rate for over-the-air downloads today.
An ultra-high resolution mobile screen that operates in both portrait and landscape.
Crystal clear video capture and playback at speeds of up to 30 frames-per-second.
ROKR-like music capabilities and up to 32GB of expandable memory8; enough storage for 12 full-length movies9 or 70 hours of music4 on today’s 4GB microSD memory cards.
Mobile TV access to streamed content from CNN and BSkyB and others for on-the-go viewing.
Mobile gaming with access to some high-quality games from Electronic Arts’ popular suite of titles, including an integrated demo of EA BIG SPORTS SSX3.

To further enhance the rich entertainment experience, in a Motorola first, the Z8 is being shipped with a full-length major motion picture pre-loaded on a 512MB microSD card – Universal Pictures’ “The Bourne Identity” – along with the amazing one-ounce ROKR S9 stereo Bluetooth® 11 headset, and a host of entertaining pre-loaded applications.

Get Smart Globally: With the introduction of the Q 8 (GSM/EDGE) and Q 9 (HSDPA), the MOTO Q is now available to a global audience helping consumers everywhere take control of their work and play. These two new editions follow the award-winning MOTO Q (CDMA) that launched in North America in 2006 and surpassed one million units in sales – a milestone no other QWERTY device has reached as quickly. Motorola also announced today for select regions, the introduction of “My Q Paks” – a gift with purchase. These free, application bundles will allow users to customize their MOTO Q to fit their lifestyle, thereby furthering their ability to take control. 10

The Q 9, a lightning-fast global quad-band 3G QWERTY, based on the Windows Mobile 6.0 TM operating system, couples a new sleek form factor with a dual-processor HSDPA/UMTS engine, enabling broadband over-the-air at up to 3.6Mbps – or approximately 6 seconds to download your favorite music track directly onto the device without having to touch your computer6. The Q 9 will hit shelves in Italy this week.

Let The Music Play: Mobile music is charting higher each year and Motorola research shows 54 percent of consumers want an MP3 player in their next phone and 27 percent say it’s a must-have feature. The ROKR brand will headline Motorola’s franchise of music-optimized handsets and headsets that deliver the best mobile music experience.

Motorola announced that its newest ROKR, the Z6, will roll into Europe and Asia, following the success of the touch-screen ROKR E6 in China and India. The Z6 is a music masterpiece:
Easy transition from phone to music – using the slim slider design to transition in one simple touch.
Dedicated music keys and a navigation wheel for instant access to the music library.
Fast transfer of songs using High Speed USB 2.0 connections – for example, transfer 500 songs in 15 minutes4.
Ease of use and familiar song management capabilities – Windows Media PlayerTM 11 to allow simple transfers of purchased music from PC, even enabling calls to be answered while connected to the PC.
Ample storage capacity – supports up to 2GB of optional removable memory for approximately 1,000 songs4.
Stereo Bluetooth wireless technology11 for wire-free listening on stereo Bluetooth headsets11 such as the recently available ROKR S9.

Motorola today also announced a new marketing agreement with Napster (Nasdaq: NAPS) that will make it simple for Motorola mobile users to join the Napster community and load music content to their ROKR Z6 and other compatible Motorola ROKR music-optimized and music-enabled handsets. The companies will also give consumers one-month of free unlimited access to unique music content and more than 3 million song tracks through Napster To Go.

Phones for the Masses
With the W-Series and MOTOFONE, Motorola is answering the call for the mass market with a diverse portfolio that includes the best of the basics for everyday communications. Expected to grow 15-20 percent over the next two years, the segment includes first time cell phone users, those looking for a simple device to talk and text, or a basic cell phone owner upgrading for better features. For more information on Motorola’s announcements, please visit www.motorolalaunch.com 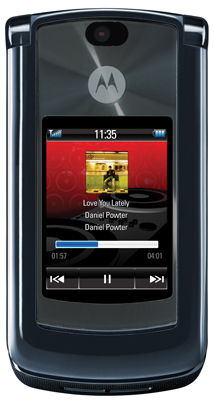 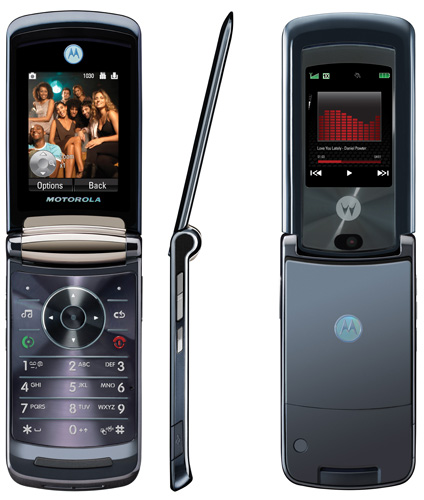 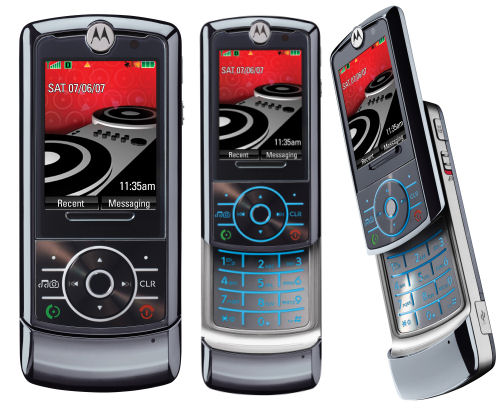 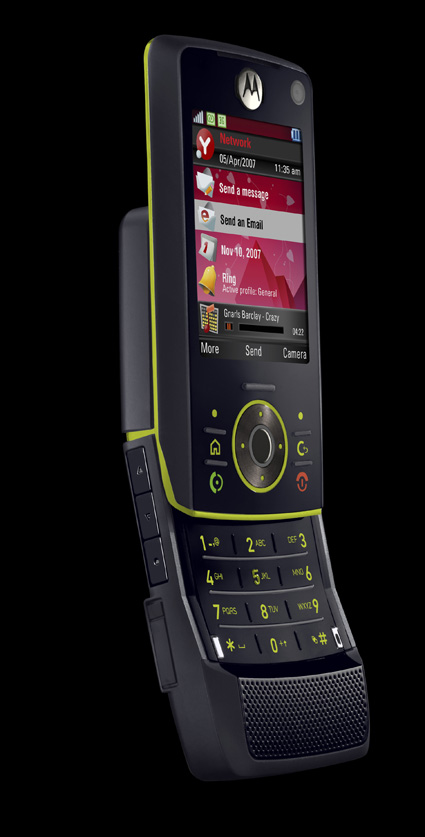 Comments
On 2 Jun 15:38 Nishant wrote
I like motorola phone very much it has some class in it
On 22 May 14:14 carkitter wrote
I like the style of the RAZR2. Nicer keypad and the even thinner too!
Would definately consider this as SE are weak on clams IMO - where's the Z800 replacement??? and can't stand Nokia's 7390 colour schemes.
Would need to be 2MP, decent UI, BT v2.0 + A2DP and good PC synch software before I'd switch though.
Don't think much of the sliders, can't compare to S500i for stlying.
On 20 May 20:13 rayden wrote
otra vez motorola mostrando de que estan echo tras el paso de los años
esperemos que sean mas resistentes sus flexibles...
la misma estructura y diseño mismo software . del 1 al 5 de ofresco 3
On 20 May 10:47 smellycat wrote
sexy but ya i know moto sucks. bad hardware & software shit battery life.
On 19 May 09:54 adeem wrote
what is this ? phone or shoes... new and stylish sandels hahaaa
moto i hate that word now its enough same desing same specification
n95 stupid phone no battery time slow camera result of camera is very boaring stupid slide system and silver color is not good SE is better then theses phone good pda phone they are providing with lots of connectivity good battery time and display sound none compete with sony
shame for motorola and nokia plz growup
On 19 May 04:50 SeF wrote
if only motorola could keep up using UIQ instead the non-standard linux OS then they could get more fans as well as even potential buyers of SE and nokia smartphones. motorola has no guts in making something new and they fear to revert the utilization of linux whilst linux has nothing more to offer than symbian and windows can. they will surely be foiled in their attempt to regain the usual moto-techies.
On 18 May 17:39 pop wrote
Cool mobiles. Motorola rules the world of mobile technology and style. I want one now! Goodbye SE and NOKIA, you are just mere pretenders!!!!!!!
On 18 May 16:44 wawa wrote
Nothing is new here..........only the shape that differs
On 18 May 13:54 papa wrote
same old same old wit its problems hell no not for me
On 18 May 09:09 globe wrote
another razr-like? OMG i'm so fed up with moto..
On 17 May 14:24 Dev wrote
What i can only say that their design can be matched by none while no manufacturer will like to match their pathetic menu navigation display
On 17 May 09:42 JIBJIB wrote
God Moto's suck, they have a crap battery life, a menu that's harder to navigate then the pacific ocean and they have been the same design for four years now. If you buy a moto you are good god damn sheep.
On 16 May 19:00 chrisinuk wrote
just another revamp on the old moto range, im not getting any of this lot as they dont really offer anything unique at this time.
On 16 May 18:16 Rifqi wrote
I see nothing new here... the same old Moto everywhere.
Boring? Sure.
On 16 May 17:20 DoctorMantis wrote
I hope this new UI's beauty is more than skin-deep...
On 16 May 16:01 Prom1 wrote
Pure quality deal with the Z8

SE better step up their game! I expected something like this on the W850i.
On 16 May 15:55 Fish31 wrote
Sony loosing the battle?! Yeah right, apart from the N95 Nokia haven't produced anything special; and even that isn't going to make a huge difference as the majority of people won't want to pay that much for it and neither do they want everything it has, and of course Sony's answer to this will be coming soon which will be the better as always. As for Motorola, yeah they're nice phones but we all know Motorola aren't the greatest for technology and the new designs are just slight differences to their older models, nothing that is going to really make a difference.
On 16 May 15:17 Nick wrote
zzzzzzzzz.....
On 16 May 14:56 cragzh wrote
same old moto
On 16 May 14:10 maguy wrote
SE is slowly losing the battle...nokia is coming back strong!and now we get to see motorola's potential.this is sad.
On 16 May 13:59 Clubber wrote
Ugly!!!
On 16 May 13:48 Hussain wrote
The only mobile interesting is the UIQ3 one. all others more like the old razor to me