Greenpeace first released the 'Guide to Greener Electronics' in August 2006 and this is the sixth version of the list. The 18 top manufactures of personal computers, mobile phones, TV's and games consoles according to their policies on toxic chemicals and recycling. The TV and games consoles manufacturers are new this quarter.

Nokia has always been the best in class according to the Greenpeace Green Guide. The reason why Sony Ericsson now is the leader is because Nokia has penalty point deducted for deficiencies in takeback practice in Thailand, Russia and Argentina

Greenpeace tested the implementation of product takeback programmes in six countries where Motorola, Nokia and Sony Ericsson claim, on their websites, to operate product takeback programmes. Nokia representatives in the Philippines, Thailand, Argentina, Russia and India were not informed about their companies' own programmes and in many cases provided misleading information. Motorola staff in the Philippines, Thailand and India was unable to direct customers to collection points in their respective countries

The ranking criteria reflect the demands of the Toxic Tech campaign to the electronics companies. Our two demands are that companies should:

The two issues are connected. The use of harmful chemicals in electronics prevents their safe recycling when the products are discarded. Companies scored marks out of 30 this has then been calculated to a mark out of 10 for simplicity

Read more about the line up at the Greenpeace web site

The table shows us that the average has rosen every time since the start except this last quarter. Motorola and Nokia should take the blame for this. Motorola falls due to penalty point for poor takeback practice in Philippines, Thailand and India.

Keep in mind that the guide does not rank companies on labour standards, energy use or any other issues. 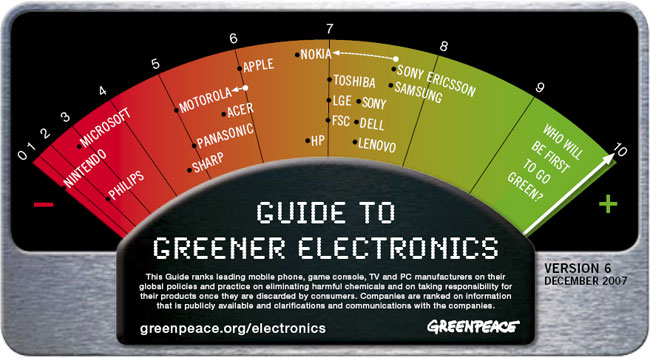