London, October 10, 2005  Sony Ericsson emphasised its continued commitment to Symbian OS today with the announcement of its next generation smartphone to the global development community. The P990 will be the first commercially available smartphone to adopt the enhanced Symbian OS version 9.1 and UIQ 3 software platform. This flagship UMTS smartphone is Wi-Fi enabled, has a 2 megapixel camera with autofocus and features a new hardware keyboard beneath the flip-down keypad. The phone will start shipping during Q1 of 2006. The P990 is the next in a line of successful Sony Ericsson smartphones - the P800, P900 and P910  and is based on the same proven concept and recognisable form factor. All have been popular with users, operators and software developers thanks to their powerful productivity features. Operator feedback and download statistics from the Sony Ericsson Application Shop have shown that consumers, both business and personal, are interested in using their smartphones to the fullest potential. Average Revenue Per User (ARPU) can be as high as 4 to 5 times that of more traditional voice-centric mobiles.

To ensure a large proportion of applications are available on the new Symbian and UIQ software platform when the P990 goes on sale, Sony Ericsson has decided to announce the smartphone well in advance of availability so that developers have time to create and certify as many applications as possible.

The technical prowess of the P990 will be brought to full life by applications from the third party developer community," said Jan Wäreby, Executive Vice President and Head of Sales and Marketing. Demand for applications on the P800, P900 and P910 has been very high. Our smartphones have been recognised as the most advanced and useful on the market, and we want to maintain this reputation with the P990 by ensuring theres a rich supply of top applications for enterprise, productivity, leisure and gaming when users make their first visit to the Sony Ericsson Application Shop."

As with its predecessors, the P990 is designed to be first and foremost a great mobile phone. It also offers all the benefits of UMTS including video calling, high-bandwidth multi-media downloads and the ability to browse the Internet with full HTML pages. These are viewed in landscape on the new Opera 8 browser. In addition, the P990 is prepared for all major push e-mail clients enabling full e-mail access with attachments, anywhere, anytime.

The P990 has multiple text input methods enabling it to support all users needs and preferences. Writing e-mails is made easier by the new hardware keyboard positioned beneath the flip-down keypad on the main body of the phone. Reading them is made simpler on the large 2.8 inch QVGA touch screen. Multi tasking  being able to browse the Internet, send and receive files at the same time as talking  is now possible due to the enhanced capabilities of the new software platform.

Memory has been extended in order to handle all multi-media downloads and e-mail attachments. Memory Stick PRO Duo up to 4GB will be available in the market at launch and the P990 now has up to 80 MB user free memory. A 64 MB Memory Stick PRO Duo is included in the box, preloaded with a VPN client and trial version of a virus scan package.

The combination of UMTS and WLAN features will also significantly improve the efficiency and flexibility of applications such as e-mail, browsing the Internet/Intranet and video telephony. WLAN, available in hot spots all over the world, acts as a complement to high speed 3G services, enabling widespread access to corporate network services.

Developers can program in C++ or Java to create powerful professional and personal productivity tools for the P990. The smartphone is based on Java Platform 3 (JP-3). It supports four new Java Specification Requests (JSRs) including Web Services (JSR-172) and is the twentieth phone from Sony Ericsson supporting Mobile Java 3D, demonstrating the companys leadership in this new technology. Standard Java applications can be run with either the flip-down keypad open or closed.

The P990 will be demonstrated in booth # 124 at The Smartphone Show 2005 in the ExCeL Centre in London on October 11-12, where Sony Ericsson is headline sponsor. Rikko Sakaguchi, Senior Vice President and Head of Product & Application Planning, gives a keynote presentation. 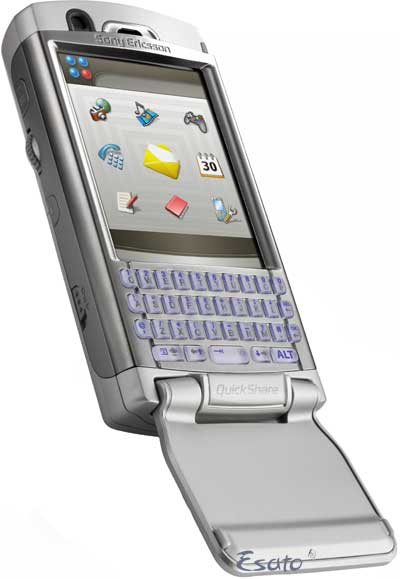 Comments
On 18 Aug 17:17 tonybee wrote
who gives a shit ... when is it available i the uk?
On 14 Aug 23:32 tiffy wrote
stop filling us up with you no what,when is it comeing to the uk,is it worh waiting for?
On 17 Jul 23:32 logan wrote
u guys suck....the screens no issue...this phone is plain fantastic im sure if sum1 offers 2 give u one ull snap at d offer and wont think for a millisecond about the screen....and yeah mikie will u really prefer a p910 wid upgraded software insted of d p990?? i dont think so....if u had a choice 2 hav ne of them ud jump at d 990....cuz its d most awesomest thing ever
On 12 Jul 23:04 fin wrote
coming from the world of xda (Xda II, then Xda IIs, now currently XDA Exec) I have to say that the keyboard is a big plus over previous p series phones. So what if the screen is a bit smaller? If screen size is an issue, go with a nice big vga screen (Xda exec). If you dont want a brick in your pocket (albeit with a big sexy screen) the p990 looks perfect! I can't wait til it comes out.
On 1 Jul 02:06 Felix wrote
Sony Ericsson is playing the public.
We have already waited a year.
They extended from 1st half 2006 to 2nd half 2006.
Why not change to a progressive Nokia PDA.

Felix Leung of Hong Kong
On 9 May 08:44 george wrote
its the best
On 9 May 08:42 sam wrote
i love the p990 its the best thing ever happened to the morden world of tech.it is the best and dont care how much is the cost i love it.its the worlds most advance phone
On 8 May 09:08 amit wrote
a horrible phone with such a small display . most of the functions suck like hell. most of them are extremely outdated for this age
On 3 May 11:42 aj wrote
this handset has some fantastic features but the only draw back is that its bulky.
On 1 May 12:44 timmyagain wrote
If I was in charge of the design concept, I would've put that keyboard in the software... and if it's so damn important, I would script it so that there is tab you can press somewhere in the corner and that keyboard would pop up anytime, anywhere...

>end of rant
On 1 May 12:38 timmy wrote
Man, that screen is a total shock...
When I saw the first pic of the front and back(t&a), I had a mental orgasm... but then, they took off her skirt and I saw myself staring at a penis made out of a pointless Treo/Blackberry A# keyboard... it was like when Ace Ventura found out Lt. Lois Einhorn was Ray Finkle...
honestly, I was going to make a purchase until I saw this. Everything looked so promising, like the video-call cam in the front, the 2Mpix cam, the expanded MemSProDuo 4Gb compatibility, wi-fi improvement, the body looks more sleek... but the SCREEN MAN, the SCREEN

On 24 Apr 04:18 drew wrote
what happened to the display?
On 20 Apr 20:32 stef wrote
oh!. so small a display..
On 20 Apr 10:09 mikie wrote
I wanted the phone till i see that the screen is smaller. i dont understand why they would make the flip down like that. its perfect except for that. i am so dis-appointed. i only by ericsson phones and i only buy the best. Now all i want to know is can i just get the software upgrade in my p910a because that flip just was a very bad move with this product. i wish they would have had me on that development team. it seems like they would have realized that all the people who buy the p series might be in love with the screen. I might like the fact that i have the large screen to view better. Taking away the screen, and giving the phone more functions just was not a smart idea. i vote that the development team behind this mess up be let go. To me that part of the design is just plain common sense.
On 18 Apr 19:32 boy wrote
very small display