By introducing the Motorola RAZR, the company once again raised the design benchmark for the industry and unleashed consumer frenzy for the ultra-sleek must have" mobile handset.

Noted by industry experts as a game-changing feat of design and engineering, the Motorola RAZR measures just 13.9mm thin. The mobile handsets radical and revolutionary design transformed consumers expectations for how a mobile handset should look and feel.

The RAZR is Motorolas design philosophy made real: technology, design, and exceptional communication in one," said Ron Garriques, president, Mobile Devices, Motorola. The development was a journey we took to find and express the soul of our company. This milestone proves Motorolas philosophy of engaging consumers and keeping them wanting more."

History in the Making
The Motorola RAZR launched on the global stage in Hong Kong. The game-changing handset made its U.S. debut with Cingular Wireless and created a sensation among consumers. Since its introduction in the fourth quarter of 2004, Motorola posted an industry-leading performance in handset sales up 42 percent versus fourth-quarter 2003 shipments. And in its second quarter 2005 sales, the Motorola RAZR V3 had sold more than five million units globally, a record that was topped in the third quarter of 2005 with sales of over 12 million units globally. By achieving the 50-million-unit milestone today, the Motorola RAZR has claimed its place as a global cultural design icon.

Celebrity and Fashion Status Symbol
As the must-have" in mobile communication, the Motorola RAZR has appeared in the hands of celebrities and on the pages of every fashion magazine since its launch in November of 2004. Riding on the success of the RAZR in Silver, Motorola introduced the special-edition RAZR in Black at the 77th Annual Academy Awards in early 2005.

In September 2005, the iconic mobile was created in hot pink being seen in the hands of Hollywoods it" girls, including tennis pro Maria Sharapova. In November 2005, consumers were able to purchase the Motorola RAZR Magenta at T-Mobile. By February 2006, two other varieties of pink were offered at Cingular Wireless and Verizon Wireless stores across the U.S.

Recently, the Motorola RAZR has continued its course as a fashion-forward mobile device via the new MOTORAZR V3i DOLCE & GABBANA edition. Motorola has teamed with high-end fashion designers, Domenico Dolce and Stefano Gabbana to dress-up the MOTORAZR V3i DOLCE & GABBANA with a spectacular gold and silver finish and engraved it with the signature Dolce & Gabbana logo.

Award Winning
Awards presented to Motorola in honor of the ground-breaking RAZR V3 include:

Phone of Firsts
A major accomplishment in design and engineering, the Motorola RAZR V3 leads the industry in space-saving technology. With multiple patents, a combination of metals and new advances such as an internal antenna and a chemically-etched keypad, the Motorola RAZR is now a household name. Its revolutionary design continues to influence and inspire Motorolas comprehensive portfolio of mobile handsets, as is evident in the Motorola SLVR candy-bar line-up and the new and ultra-revolutionary Motorola Q device, which is transforming the QWERTY experience.  www.motorola.com 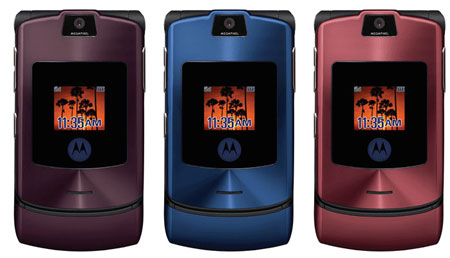 Comments
On 4 Aug 22:55 Jazz wrote
Lucy Hamilton from Sheffield wants one and I have told her not to but she just wont listen to me.
On 22 Jul 20:14 Jabbar wrote
Its a fone for the common people.

The ones that would smoke cheap fags like Berkely or roll ups in Britain.

Common. Lisas or Sharons. Johns or Herberts are probably on the second.

(The first one they had got broken that night they got drunk on cider)
On 22 Jul 09:52 don wrote
Keyword is "shipment" I honestly don't know how people keep buying this phone. The UI is still horrible IMO
On 22 Jul 01:16 MasterRyu wrote
I love the design of the V3, but the first version was let down by average software. In saying that though, later versions seem perfectly fine. Sure it doesnt have 2megapixel, autofocus etc. But who cares, you can text, take calls and simply "use it". The design is awesome, and it fits so good in the pocket.In regardes to the previous post, it really depends on what you want from your phone, to define what is "Best". How many sony ericssons look remotely like a V3, and as far as samsung go, look at the Z510.
On 21 Jul 21:12 xanK wrote
I must admit that it has an excellent design, but its features are less than mediocre compared to what SE and Nokia usually offer.
On 21 Jul 18:00 jack wrote
moto v3 = trash